A visit with the Dongas Tribe

The tribe at Cerne Abbas. – Winter Solstice celebration with the Dongas Tribe. Scrabbling over puddles and hedges in darkness finally gave way to a group of thirty encircling a camp-fire, chanting and singing to the beat of their drums. They welcomed us with ease, offering us tea.

Immediately introducing myself to the nearest Donga, I began asking of their involvement in the road protests, and their embryonic beginnings.

Of the thirty present, only ten were from the original formation. A few lived and worked nearby, in the process of considering permanent involvement. Others, such as Max, were more candid: “I’m only a weekend Donga. I work in London as a computer programmer, but assist the Dongas by documenting their protests.” Max showed me photographs of hundreds of protesters walking abreast at Twyford Down, climbing onto diggers and mixing with the police.

The original Dongas formed from a loose-knit group of travellers which disbanded to travel abroad. As Sam described to me, they all felt drawn back to England about two years ago. She further told me that a series of coincidences, in parallel with their convictions, flung them into the spotlight.

The Donga Tribe was then media-christened by further coincidence. The term “Donga” originally derives from South Africa, meaning “valley” or “track.” This may seem rather a wayward appellation, until closer examination. Twyford Down was the crucible.

Winchester Public School sold some of their land to the government. One of the teachers at Winchester called the winding paths of Twyford “the Dongas.” These very paths were being defended by the tribe.

The main driving force of the Dongas revolves around the ownership of land, an obsessive transport policy and the general public’s naivety towards the energy it consumes. The Dongas believe this western attitude to be overtly patriarchal. The roads issue is viewed as the carving up of the “Great Mother.” 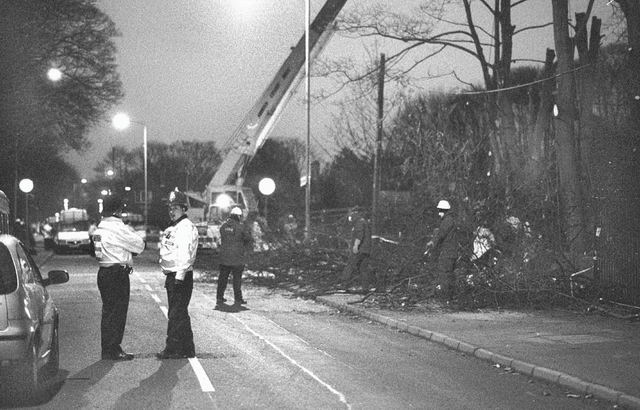 As an alternative idea of reality, it certainly has more appeal than your average clerical job in the city. Constantly circulating in my mind was the association between the Criminal Justice Act and today’s “youth culture.” I was reminded of a speech by Tony Benn MP just before the Bill was passed. He pointed out that most politicians thought the younger generation apathetic. He stated that there were many more young people in the March against the Bill than at his own party’s annual conference. The action, it seems, is not on the playing field, because the media only notices stunts or celebs; but the Dongas can be heard from the touchline screaming: “Wake up!” The celebration itself revolved around Magic Mushrooms, alcohol and fun with fire. The attitude towards the mushrooms was in marked contrast to the stifled paranoia of London Town. No chemicals, no fear, no bad trips. Could the Dongas be in danger of attaining that childlike innocence most Westerners attempt to purchase?

A main focus of the tribe, an eight-year old boy also called Sam, was running amok with torchlights. I asked him to paint my face with the coloured paints he had used upon others. This he did with great concentration, creating wonderful patterns – but then deciding this failed in artistic merit and rubbing the red paint all over my face. It is ironic that this could be construed as satanic by the media.

The Solstice was celebrated at the top of the Giant at Cerne Abbas.