Soon I realised that there was a digger working at the bottom of the Hill. We put our shoes on, ran down to the Water-Meadows and dived onto the machinery. I climbed up the tree because I wanted to get away from the action. I didn’t want to deal with such violence so early in the morning. But I wanted to do something. So I borrowed a harness, hoisted myself up the poplar tree and into the tree-house.

Poplar trees are good things – deep-rooted, well earthed, silent and wise, as all trees are, but straight up, protective, healing and gentle. I climbed out again and sat on the branch directly outside the door. The action had finished and people were running around underneath the trees.

Brian waved at me from the topmost branches of an adjacent tree. He was putting up a last-minute hammock seventy-five foot up. I looked down again and someone shouted: “The bailiffs have arrived, and they’re evicting the Water-Meadows!”

My heart started to beat a bit faster. Some people began taking down tents at the front of the site. Most people were wandering around looking worried. I turned my back to the scene to face the trunk of the poplar tree. I could see the River Avon below me. The view was a definite improvement, blighted only by the row of pylons and all the machinery around them that was there in preparation to erect even higher pylons. Shortly people began to climb the surrounding trees and sit on the highest branches they could reach. 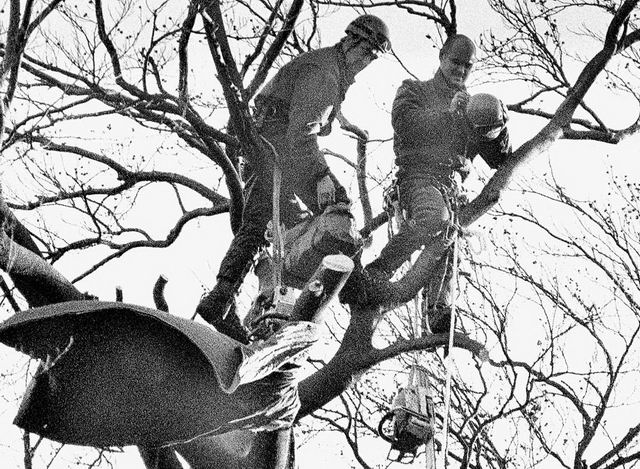 Eventually, the final call was given and people were ordered to leave the site or risk arrest. I looked down and suddenly I realised that there was no-one underneath me anymore who wasn’t wearing a hard-hat and/or a yellow jacket – with one exception, Rob the Didge.

Rob was strolling around with the supervisor, discussing the eviction and trying to bargain for time for the trees.

Eventually, he came and told us that Amey Construction had promised that if we came down, we wouldn’t get arrested and the trees would stand until Thursday. We told him that we didn’t believe them and politely declined their offer. They hung around for a while, then they assigned security-guards to the foot of the trees, and left us to sit it out.

There were seven of us – myself in the tree-house, Brian in his hammock and everyone else perched on the branches of various trees. I sat and looked out of my window. I could see Graham in a neighbouring tree. We shouted a conversation for a while; but eventually gave up. I looked down at the Yellow Jackets, then I looked across at the remainder of the camp in the neighbouring field.

Everyone was sitting around the camp-fire; some people were playing music, some dancing. It looked very merry and festival-like – even though Beltane wasn’t for another four days.

The sun was setting. It was starting to get cold. I wondered how everyone else was managing, as I was the only tree-dweller with sufficient bedding. I wondered whether I’d be in the tree over Beltane; but I’d already decided I was going to stay where I was for as long as possible – however long that would turn out to be.