3rd September 1998 : I had been pursuing an action for civil damages against the Avon and Somerset Police for the rude things they said about me in a police intelligence document – Operation Nomad bulletin. All to do with police interference of my photography, the Inglestone Common Free Festival and then Castlemorton. I have just settled the case.

The main elements and events of what lead to the action are as follows:

In May 1991, I was stopped and searched on the way to the Inglestone Common Free Festival. Gathering at the original site was prevented by the Public Order Act sect 39 etc….

The police were also operating a huge `stop and search’ operation. I was stopped and searched without good cause and on complaint, officers were abusive. It appears that officers thought that they were supposed to be stopping people at large on their Superintendents authority, rather than on individual grounds for suspicion, as the law requires.

I was there in my capacity as a Trustee of the Festival Welfare Services and the Travellers Aid Trust. On arrival on site, I was approached by a number who were most concerned at the police attention the event received. Contacted friendly solicitor firms for advice and to arrange a legal advice presence `in the field’.

Following day, was prevented from photographing the police operations under threat of arrest and intimidation. All my activities were on the road, in a public place. My photography was intended to show evidence of a number of aspects of illegality in the way the police were behaving.

I had later, successfully, complained to the Police Complains Authority about the conduct of the officers concerned at these incidents.

So much for my complaint being upheld, an apology and being told that the police acted unlawfully. All this seemed a little hollow when, latter the following year (in 1992), I was anonymously sent a copy of a restricted document titled `Operation Nomad Bulletin’. Operation Nomad was a surveillance and information gathering exercise looking into the activities of New Age Travellers and now `raves’ such as Castlemorton. In this document, officers are instructed to beware of my activities and that I photograph and tape record police operations. 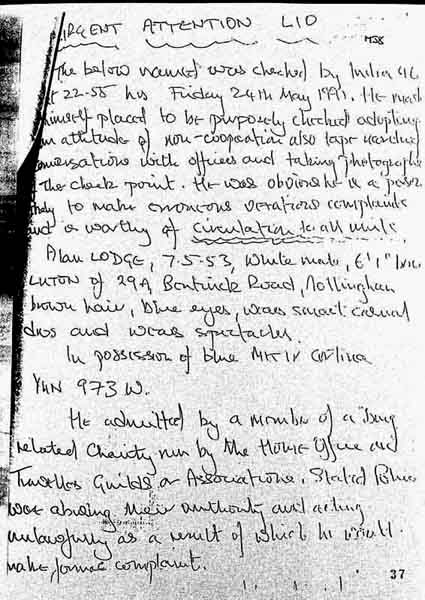 Further mention is made of my involvement in photographing and the bringing of civil actions after the `Battle of the Beanfield’ incident near Stonehenge in 1985. Yet further, it goes on to say that I am a drug dealer.

As I am not!!, I believe that this information was inserted so as to make my work as jobbing photo journalist, more difficult. It was also calculated to undermine my position with Festival Welfare Services and the Travellers Aid Trust in liaison with various authorities. 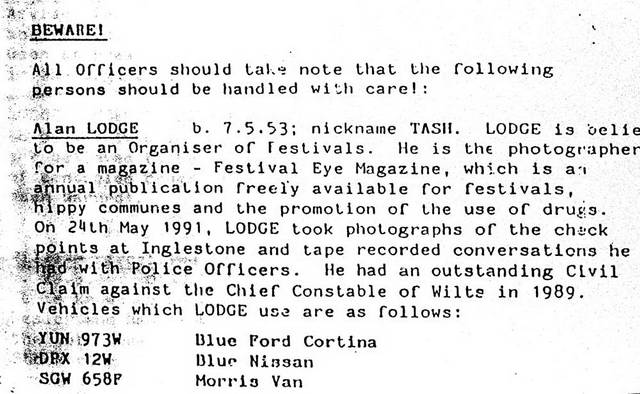 All this showed that they had not considered the original complaint at all seriously and that I was now viewed as a troublemaker.

Against this background, I brought an action against the Chief Constable of Avon and Somerset Police in the High Court in Bristol for Malicious Falsehood. I had been granted legal aid (no aid being available for anyone to bring an action for libel).

Actions for Malicious Falsehood are extremely rare. Only been about seven this century. The last case had been bought by Rupert Alison MP about two years ago against the Daily Mirror and he lost.

The entire process has taken over 6 years to get some kind of redress for the wrong done to me by the award of substantial sum.

It is worth mentioning that this tale should not be viewed in isolation. Police are increasingly using various legal `devices’ to remove photographers from the scene of actions were the police feel that they may be portrayed in a less than flattering light!!

I am maintaining a photo-Journalists ‘Hassle’ list [LINK to ADD]

I think that there is a developing pattern here that we should all be concerned about.

A photographer wrongly accused in an internal police intelligence document of supplying drugs at festival has been paid a substantial sum by the force concerned. Lawyer believe it to be the first case of its kind.

Alan Lodge, aged 45, from Nottingham, has specialised in photographing free festivals and New Age Travellers’ activities for many years.

He has accepted “substantial” damages from Avon and Somerset Police for Malicious Falsehood, it was confirmed yesterday.

It is the first time a Malicious Falsehood case has been brought over internal police documents.

In May 1991, Mr Lodge was stopped and search on Sodbury Common in Avon while on the way to the Inglestone free festival where he was acting as a trustee of the Festival Welfare Services that assist at such events.

He was also prevented, under threat of arrest, from photographing police activities at the festival. He complained and subsequently received an apology.

The following year he was anonymously sent an internal police document entitled Nomad Bulletin 4. It contained a list of travellers and people who should be “handled with care”.

The document wrongly suggests that Mr Lodge and three other named individuals were “instrumental in arranging the supply of controlled drugs at festivals”.

The document allegedly compiled by police officers, also gave the registration number of vehicles Mr Lodge had driven, his nickname (`Tash’), and suggested that he had worked for a magazine which promoted the use of drugs.

The document added: “Beware – you have been warned!!”.

Avon and Somerset Police deny the document’s contents amounted to malicious falsehood and do not accept liability, but have agreed to pay Mr Lodge in settlement of his claim, and also his costs.

Mr Lodge, whose work has appeared in the Guardian, The independent, Radio Times and I-D Magazine, said yesterday that he was very sorry the matter had taken so long to resolve.

He said there had only been a handful of malicious falsehood claims this century, and the only one involving the police in this way.

“The entire process has taken over six years to get some kind of redress for the wrong done to me by the award of a substantial sum.

“It is worth mentioning that this case should not be viewed in isolation.

“Police are increasingly using various devices to remove photographers from the actions where they feel they may be portrayed in a less than flattering light.

“I am hearing stories all the time of photographers and people using video cameras being hassled and intimidated by the police. It is increasingly prevalent”.

Mr Lodge who has worked for Release, the drugs advice agency, said in his action the document had damaged his reputation as a negotiator between police and members of the travellers’ community and at free festivals. It had also affected his work as a freelance photographer.
Photographer Awarded Damages from Police

A freelance photographer wrongly accused in an internal police document of supplying drugs at free festivals has been paid substantial undisclosed damages by the Avon & Somerset Police for malicious falsehood.

Alan Lodge, 45, has been covering music festivals and the activities of New Age travellers for years. In 1992 he was anonymously sent an internal police document entitled Nomad Bulletin 4. Operation Nomad was a surveillance and information gathering exercise looking into the activities of travellers and rave culture.

He was listed as someone who should be ‘handled with care’ and one paragraph stated that he was one of a group of four who are ‘instrumental in arranging the supply of controlled drugs at festivals.’

Lodge launched an action for malicious falsehood (BJP, 6 January, 1994) which was settled last week. Lodge said the document had damaged his reputation as a negotiator between the police and New Age Travellers and affected his work as a freelance photographer. Mr Lodge has worked for the Guardian, The Independent, I-D Magazine and Radio Times.

Mr Lodge says: `The entire process has taken over six years to get some kind of redress for the wrong done to me by the award of a substantial sum. The tale should not be viewed in isolation. Police are increasingly using various legal `devices’ to remove photographers from the scene of actions where the police feel that they may be portrayed in a less flattering light. I think that there is a developing pattern here that we should all be concerned about.’

Please take time to look through my Police Surveillance Gallery!! I have included pictures of the many styles of equipment being used to watch, gain intelligence and, they hope, utimatly subvert the intentions of people involved in dissent.

I think that they also may give you an idea of what it is like being me!! This is the kind of scutiny that many of us have to live our lives under