On Sunday 23rd July from 2pm approximately 2000 people occupied Upper Street in Islington, North London, demonstrating against society’s dependence on the motor car and the fact that it causes pollution and death. The demo, which closed Upper Street and part of Liverpool road to traffic for the whole afternoon and early evening, was more of a party with both live and recorded music, food, stalls and a great kids area. 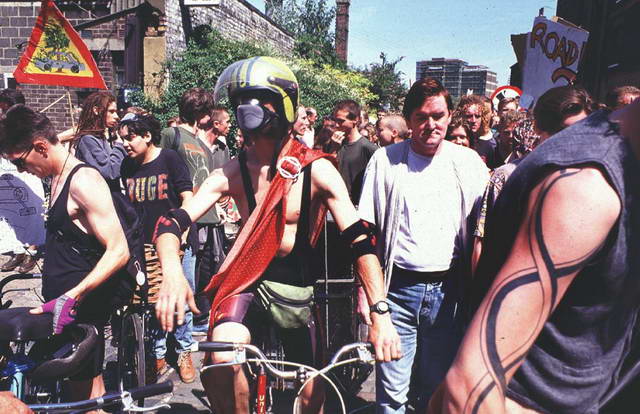 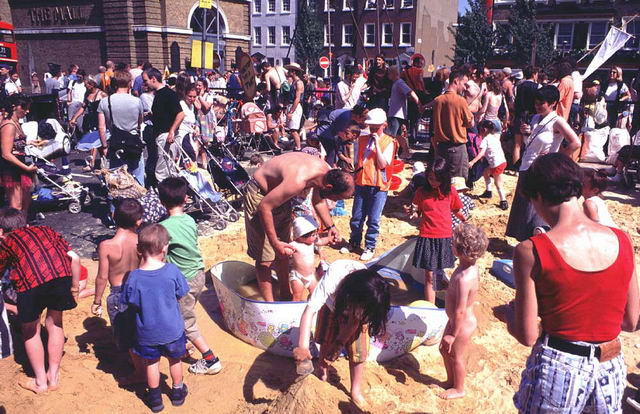 At approximately 8:15pm, for reasons known only to the police, a number of officers from the Territorial Support Group (TSG or riot police) in full riot gear started assisting the uniformed police. They were supported by at least 10 other vehicles, police in helicopters and video crews positioned on buildings. The mood of the demonstrators was still peaceful. At least 18 police vans full of TSG had been spotted some 50 minutes earlier in a back street near Upper Street. It must be asked why so many officers in full riot gear were on standby so early when the mood of the day had been so peaceful.

The deployment of police in riot gear made the atmosphere a great d more aggressive. A small bottle (ONLY ONE) was lobbed towards these riot police. It was NOT aimed at the uniformed police who were some way in front of the riot police at this stage. Within seconds of this happening, the TSG drew their batons, pushed past the uniformed officers and started assaulting demonstrators with shield and batons. Over approximately the next 90 minutes the TSG violently pushed and beat demonstrators towards and past Angel tube station and down Pentonville Road. At this stage there were some 200 officers in full riot gear backed up by at least a further 100 officers in uniform. There were under 100 demonstrators. 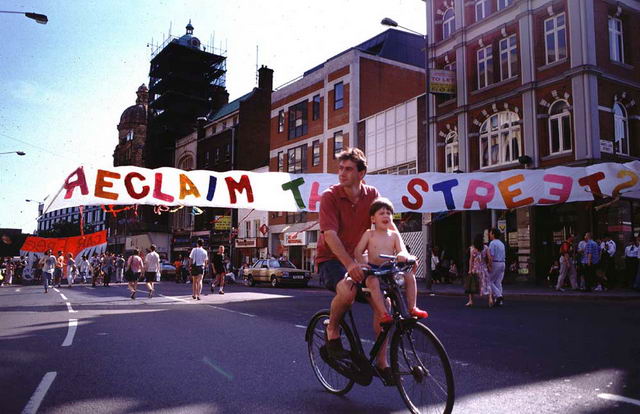 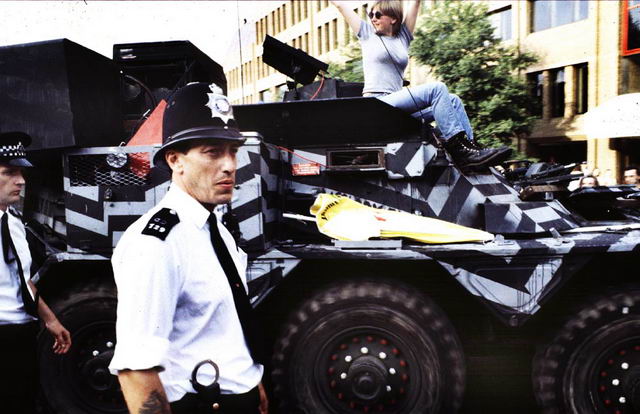 The riot police pushed demonstrators down Pentonville Road. the wer asked on numerous occasions by the LDMG where they were directing people and to ‘calm down’. Needless to say their answers were less than helpful. Eventually (at approximately 9pm) demonstrators, whose numbers were now less than 50, were moved into Northdown Street where all exits were blocked by police and riot vans. Many people trying to leave this area were searched. The reason the police gave when pressed was that there had been a public order incident, missiles had been thrown and offensive weapons had been seen – so they were checking if people had missiles or offensive weapons.

From the moment the riot police took over from the uniformed police they were indiscriminately and very heavy handedly arresting protesters. In total they arrested 17 people. At least one demonstrator needed hospital attention (head split open by a police truncheon) and two more were knocked unconscious by the police. Every time a legal observer tried to get details of an arrested person we were either threatened with arrest, were physically moved from the scene of the arrest, or were assaulted. 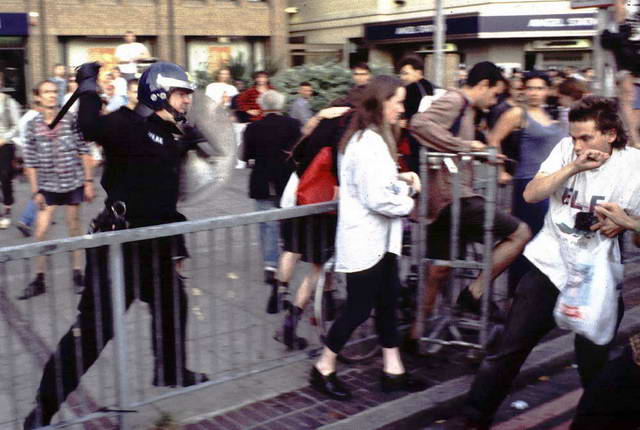 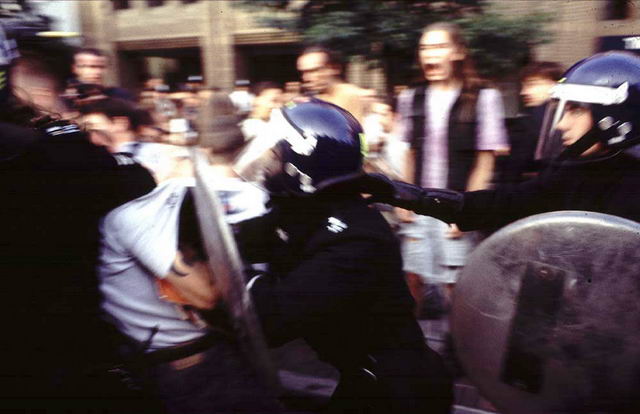 Although the actions of the riot police were totally out of control throughout the whole episode, we feel a number of incidents deserve special attention: * One particular officer in full riot gear was seen on at least three occasions using his clenched fist to punch demonstrator in the head and face – one of whom was knocked unconscious. *

An articulated lorry was moving through the crowd and the police were violently pushing people past it causing a number of them to lose balance. It was only luck that somebody did not fall under the wheels of this vehicle.

Police were asked to stop pushing for a while by legal observers and told to “move or be nicked”. * When one demonstrator was knocked unconscious, legal observers protesters tried to see if he was alright, but were viciously pushed and beaten by the police. Although being advised by a person with medical knowledge that this person should not be moved, the police continually tried to move him. 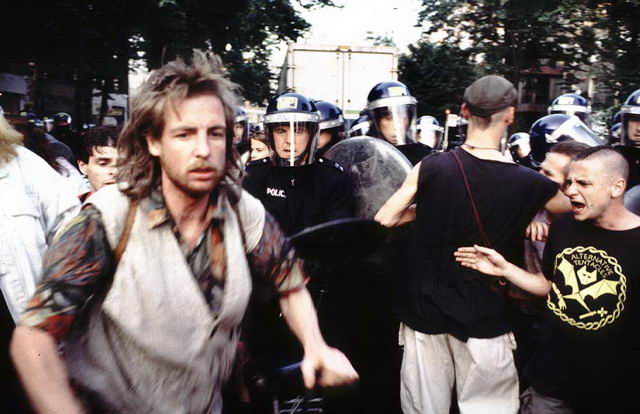 As soon as arrests were made, the LDMG tried, with difficulty, to get solicitors to all of those arrested and to find out some information about them. We staffed our office throughout the night and next day, receiving numerous calls asking the whereabouts of missing protesters. By 5am, we had details of all protesters arrested.

Charing Cross police station would only release 1 (who accepted a caution) of the 10 arrestees. The rest were held overnight and appeared in Bow Street Magistrates Court the following day, which we monitored. Two of those held were refused bail and are presently on remand at Brixton Prison until 31st July. We feel the decision to hold them overnight at the police station and in prison was vindictive and excessive. Three of those arrested were for possession of drugs and all three pleaded guilty.

We have set up a defence campaign for the 13 still facing charges. Another indication of the states attempt to brutalise and criminalise us is the severity of these charges. Most are being charged with section 2,3 or 4 of the Public Order Act 1986. Our aim now is to; get the two out of Brixton Prison; prove all 13 innocent; look into actions against the officer who punched demonstrators and; assist people to sue the police for false arrest.
The Legal Defence And Monitoring Group is a UK voluntary organisation who provide legal monitors for demonstrations, actions and other events where civil rights abuses may occur. Their job is to watch the police activity at such events and try to gather information, witnesses and evidence to use in defence of those arrested unnessecarily. This is their report of events at Reclaim The Streets, a peaceful demo based in North London.