Exodus: Parties with a Purpose

An obvious progression from Acid House parties was to link up with the mobile sound systems of the free festival circuit that has toured Britain since the sixties. The summer of 1992 was the honeymoon period for the marriage of ravers and travellers. The culmination of these festi-raves was an event held at Castlemorton at the end of May. Estimates of the numbers present vary from 25,000 to 40,000; for many there it was the ultimate party. The media depiction, however, was of a marauding invasion and the public outrage sowed the seeds of the Criminal Justice Act 1994.

The tightening up of legislation aimed at stopping illegal parties has had three results. The first is that the new laws have successfully forced some people back into licensed events and nightclubs. The Government’s action is justified as protecting people by only allowing them to dance in venues that comply with safety regulations, although in practice it is in the licensed venues where people die.

There has been a death here in Bedfordshire, says Glenn Jenkins of Exodus. Not at one of our 72 harmless dances, but in a club. It’s one of those clubs that is supposed to hold 500 but they pack in 1000. A guy collapsed in there and he got barred ­ people monging out are bad business. His mates had to take him to hospital in their car but got lost on the way. He died, but he hadn’t taken Ecstasy, he’d had two wraps of speed.

The second effect of the increase in legislation has been an emigration of sound systems. After Castlemorton ten members of the Spiral Tribe sound system were taken to court and charged with causing a public nuisance. The trial in 1994; cost £4 million 176 yet the defendants were freed through lack of evidence, a local councillor admitted to me that because they had a high media profile they had been made scapegoats. Spiral Tribe and other sound systems have found a more cooperative response from foreign authorities. The free party scene now encompasses many parts of the world from Goa to the San Fransisco bay area. 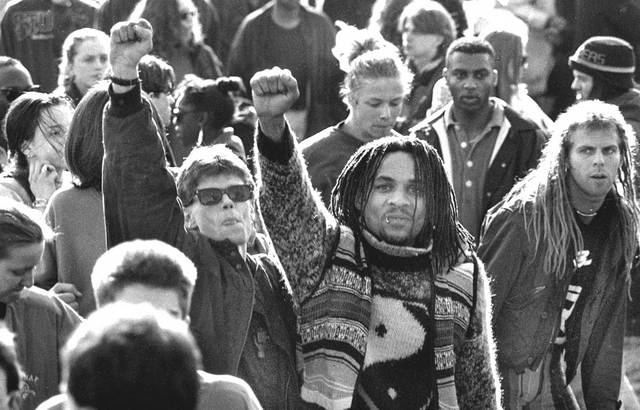 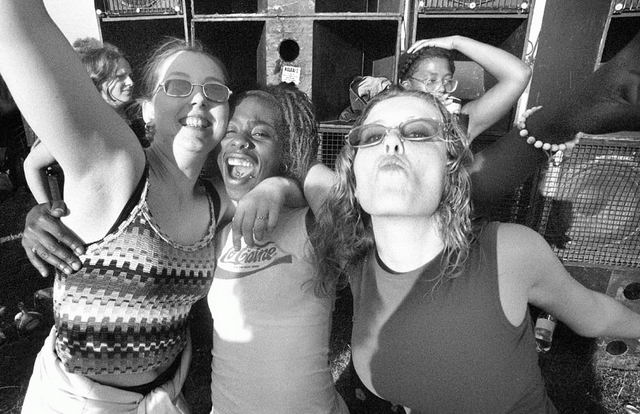 The third effect became particularly noticeable with the passing of the Criminal Justice Act. People have been so outraged by the draconian powers to prevent parties that they appear to have become determined to create bigger and better events. It has also seen the politicisation of the scene with the Advance Party and United Systems voicing protests against the new laws and forging links with other groups affected. Gail, who organises illegal parties with the DIY collective Justice? in Brighton, describe show the Act has affected them:

Because of the CJA we are even more determined to have better parties, so we have to make them tightly organised. It’s a lie that only licensed venues are safe. We don’t turn the water off, it’s always cheap and freely available. We make sure the venue is spacious, airy and well lit and that there is a chill-out area. People are free to walk in and out if they want to sit down, or take a breath of air. It may appear like it’s disorganised but we have our own form of stewarding, we have nurses attending, we have fire extinguishers. We make sure that there are always people there who can cope if anything bad happened. I think there will be more parties but I don’t know if it’s a good idea to have them too large as it’s not so easy to keep an eye on what’s happening. I think we probably do take advantage of the E vibe that means people take care of each other.

Glenn Jenkins says, we called ourselves Exodus because what we were doing was knocking extortion out of our lives. Exodus indicates a large number of people moving from one lifestyle to another. Our inspiration came from Bob Marley who took his inspiration from the Bible. It’s all about freedom of thought. Emancipate yourself from mental slavery – Bob Marley sings our anthems. He could see that if we could hold down racial divisions and so on, then there would be harmony. Harmony means heaven – heaven on earth is harmony on earth. We take the Rastamen to be our forefathers, they played a large part in our consciousness forming. Rastaman is a spiritual tag not just a black thing, it’s a soul issue, not a skin issue. We’re the Rastamen that Bob Marley inspired by coming here and making the album Exodus.

Exodus began in June 1992. They have provided a roof for homeless people in a once derelict building, Haz Manor, and set up a community farm. Glenn described how the impact of Exodus on local people has been much more than simply providing parties: 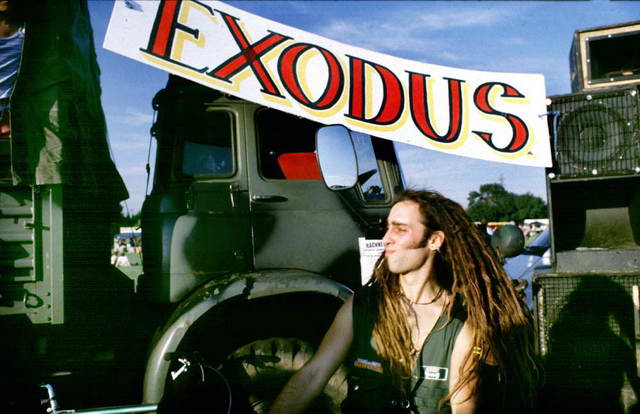 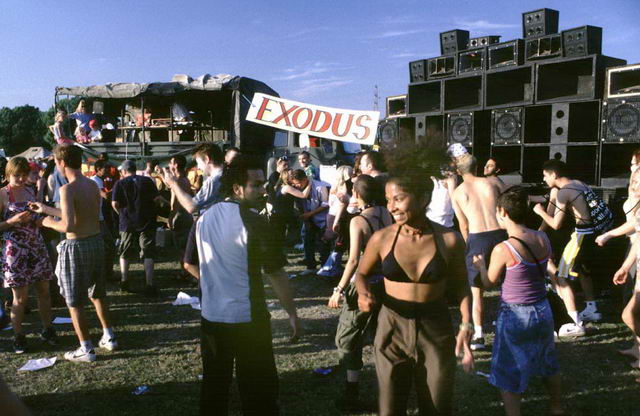 We’ve got our own heart beat, we’ve got our own moral economy, it’s much more moral than theirs because it’s not about exploiting each other. Haz Manor has been built on the same principle. There might be trade but trade’s different from exploitation ­ making a living is different from making a killing. I don’t know why they can’t see we’re their dream come true because we’re not asking for handouts, we’re saying we’re able to help ourselves. I think they feel threatened by it simply because when you put a diamond in a pile of shit, you know it’s shit.

We’re not revolutionaries, we’re freedom fighters. The Criminal Justice Act is about freedom to make profit, freedom to build roads without people interfering, freedom to siphon people into pubs and clubs rather than fields and churches. That is why it is heavily sponsored by the Tory party. Underlying it all, they fear rave culture because it’s an anarchist culture.

To the leaser of dis place…….
We hope that you are not too mad,
‘cos of the good time we have just had.

We haven’t caused you damage mate,
even though the dance ran late.

3000 people were here tonight,
making use of this place,
right..!

It’s not a crime to come together,
in places sometimes left forever.

We come in convoys 5 miles long,
so many thousands can’t be wrong.

So, once again, we’re sorry for the
broken lock on your front door,
but, being truthful, we can’t say,
that we regret in any way,
bringing back community
to a town that lost it,
totally …!

When Exodus parties are running there is a 40% drop in trade in the town’s pubs. Exodus is convinced the brewery’s influence over the local newspapers has been the cause of the negative image they portray of the collective. Further than this, a public enquiry has been called into allegations of police misconduct. Journalist Tim Malyon wrote the following piece to demonstrate the extent the authorities are prepared to go in order to stop this revolution:
The Trials of Exodus 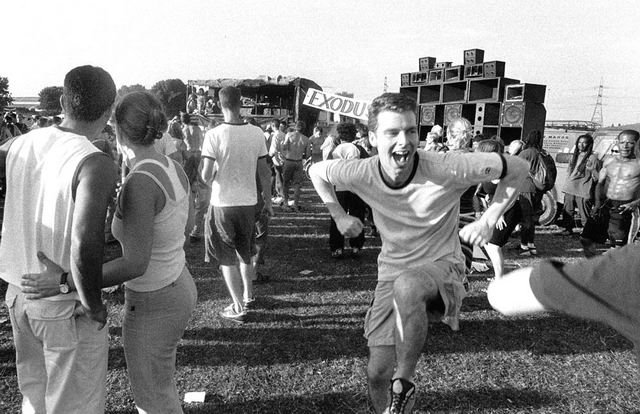 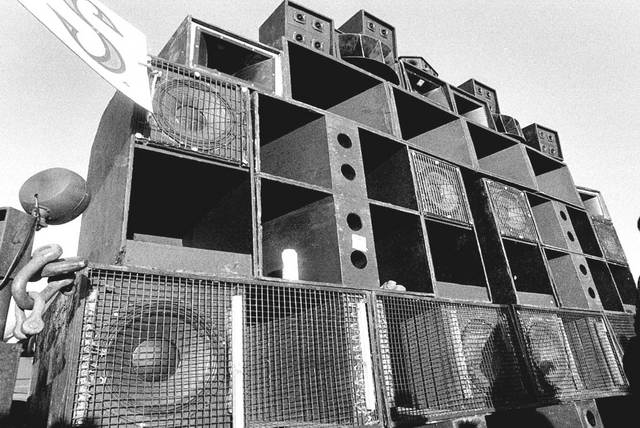 On New Year’s eve 1992/3 Exodus held its largest party with ten thousand people present. Two weeks later it supported the squatted occupation of a derelict hotel and started channelling money from the collections and soft drink stalls at the dances into squat renovation. Exodus is a force for the good, bringing hope, joy and community where before there was desolation. But some police officers saw a different picture. Chief Inspector Mike Brown cooperated with Exodus in helping make venues safe and trying to locate legal venues, until his superiors at force headquarters blew the whistle.
A series of massive police operations ensued, costing over £103,000, on the squatted hotel, on Exodus’ Long Meadow Community Farm, and on the pre-dance assembly point. Thirty one criminal charges arose out of these operations for which there was just one conviction, itself highly dubious. The charges served to paint a devilish picture of Exodus.

After the hotel eviction police officers are alleged to have copied into their notebooks crucial information written on a blackboard by a sergeant at Luton Police Station. This was used as evidence in order to procure public order convictions and convictions against collective members arrested for alleged violence and abuse. In another trial arising out of an earlier raid on the hotel, at least 13 police officers failed to produce their pocket notebooks after being ordered to do so by the trial judge, causing cases to be dismissed. Could it have been because they contained lies?

Then there was an alleged drugs find. During a raid by more than 100 officers on the Exodus farm, Ecstasy worth £2,200 was found in Paul Taylor’s bag. Taylor is a prominent black member of the collective, one of those responsible for forging the black/white union which is the bedrock of Exodus’ power for the good. The house had already been searched once by Luton Drugs Squad who had failed to find drugs in an obvious place for which Taylor could be held personally responsible. Police admit Taylor had ample forewarning of the raid, so could easily have removed the drugs if they were his. After Luton Drugs Squad had finished their search, an officer from force headquarters entered the darkened house, spent thirteen minutes inside it, then called in another officer and took two minutes to lead him to the drugs in the bag. At Taylor’s trial, the defence barrister summed up, “This case stinks, it stinks of a plot.” Taylor was found not guilty.

During the trial the head of Luton drugs squad admitted to a serious disciplinary complaint, involving mishandling of the drugs. It was also alleged that there was a rogue cache of drugs at Luton police station, origin and destiny unknown. The Bedfordshire Deputy Chief Constable, despite his reputation as a strict disciplinarian, failed to take action after any of the Exodus cases. Nobody has been disciplined, not for the ‘missing’ notebooks, not for the blackboard incident, not for the drugs.

All three political parties on Bedfordshire County Council, as well as the Police Authority have now voted for a public enquiry to be chaired by Michael Mansfield QC into “Bedfordshire Police and others’ activities” against Exodus. A retired police inspector told me, before he was gagged from talking to the press: “Licensed premises were experiencing a fair amount of loss of trade, loss of customers. Some licensees were starting to get into real financial trouble.” He added not only that alcohol-related offences dropped when Exodus put on dances, but also that political pressure was being brought to bear on the police by local members of Parliament to get on the case.

Luton is a brewery town. Whitbread have dominated it for many years. Hopefully Mansfield’s public inquiry will find out who was really responsible for trying to destroy this movement, a movement which is transforming the lives of thousands of Bedfordshire’s youth.