Travellers and the Built Environment

Travellers are part of a tradition which we all have roots in. Humankind has only setled in permanent settlements for the last 5,000 years in Britain and maybe 8,000 years worldwide. Our heritage and folk memory is of over 100,000 years of nomadism. Within Britain the roads have thronged with travellers of various sorts over the centuries, even before Romanies arrived about 600 years ago. All types and descriptions of travellers moved around looking for work; selling, buying, spreading the gospels. There has always probably been friction between nomads and the sedentary population – partly from competition for resources and partly from the inherent fear of the free by the settled population.

This reached xenophobic heights in the 16th and 17th century when Gypsies were banned on pain of death from Scotland and several were hung just for being Gypsies. In 1530 an Act concerning Egyptians required them to leave the country on pain of imprisonment or forfiture of goods. This was followed by various other Acts relating to punishment of vagabonds “calling themselves Egyptians, both genuine and counterfeit, all to be treated as criminals and suffer death and loss of land, goods, without benefit of clergy.”

Since then although persecution has continued Gypsies and Travellers have become an established, if not accepted feature of our country. In addition to the Romanies who arrived during the time of Henry VIII the population of Travellers has been swelled by Irish people working on the canals and railways, fleeing from the effects of the mid-nineteenth century famine and after the last world war in response to difficult economic conditions in Ireland. House dwellers have constantly trickled on to the road through force of circumstance or choice – for example it is known that some of the people forced to flee the London bombing and live in the countryside in vehicles during the last war continued to live in vehicles and took to the road never to return to settled accomodation.

Traditionally Travellers integrated with the local rural economy via seasonal agricultural labour and also by supplying other needs of the rural population. With increasing mechanisation the need for seasonal labour slackened during the 1950’s and many travellers forsook the rural for the urban and semi-urban environment. Increasingly employment opportunities centred around scrap dealing, car dealing and tarmac laying.

Current accommodation sites for Travellers are diverse and some of them represent the worst examples of ‘housing’ to be seen in Britain. Although some Travellers live on well maintained, well run council sites there are many examples which are no more than ghettoes. These sites are usually fenced off from the rest of the population in places, usually next to the railway tracks where no one else would want to live and where they cannot be seen. Sites are often dangerously close to industrial premises and some have high tension power cables a few feet from the tops of the caravans which most traditonal Travellers live in. However, at least these sites have access to some services – water and toilets are readily available, as is physical access to local schools. 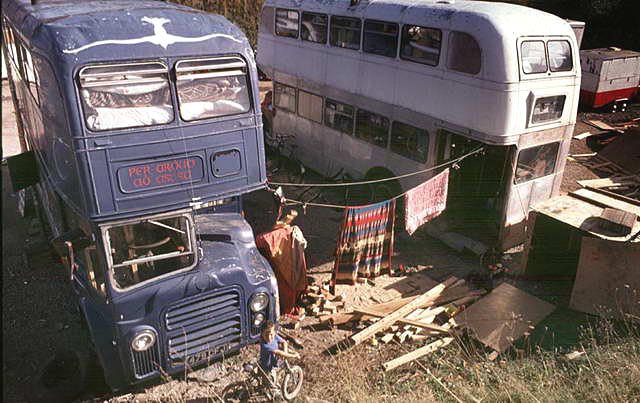 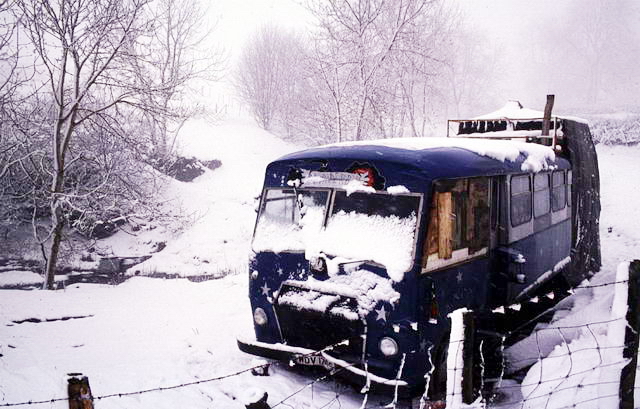 On unauthorised sites which can be in such diverse urban locations as yards of disused factories, underneath urban motorways (which have all the attendant health hazzards from traffic fumes) access to normal facilities can be non-existent. Water may have to be obtained from garages or churches, toilets in garages or public toilets used. For a bath many traditional Travellers used to resort to public baths but with their demise access to such facilities have become non-existent. Since unauthorised sites can change frequently due to evictions, access to health, education and social services can be difficult or impossible for Travellers.
New Travellers face the same problems but often in a more extreme form. It is extremely rare to find a New Traveller on an official site which are reserved for Gypsies although a proportion of New Travellers could qualify for gypsy status under the present law. As such very few have access to either water or sanitation. Education is very difficult because people are frequently moved on. Often they have to resort to emergency departments for treatment although many doctors will take on travellers, especially children.

Dentistry presents a particular set of problems as many travellers are on benefit and few dentists today are prepared to take on National Health patients. Lack of fixed housing means that benefits may be difficult to obtain or will have special conditions attached such as signing on more frequently whilst lack of an address can present severe problems in obtaining insurance etc. for vehicles. As people of no fixed abode treatment by a range of authorities can be prejudiced. For instance, because of the NFA status cases have occured in relation to motoring offences where fines are not deducted from benefits and the person involved has had a 21 day prison sentence instead of the normal fine applied to sedentary folk. 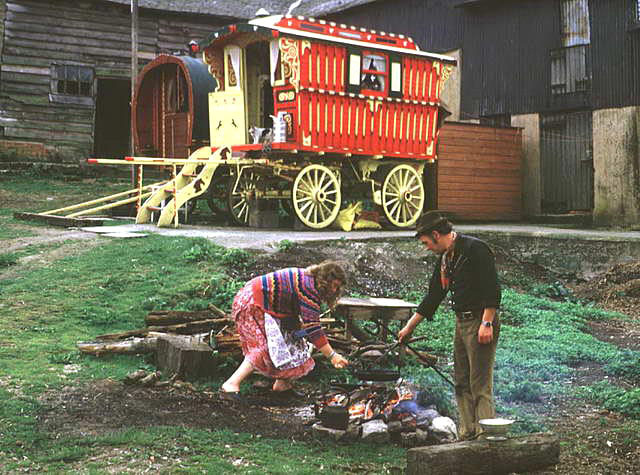 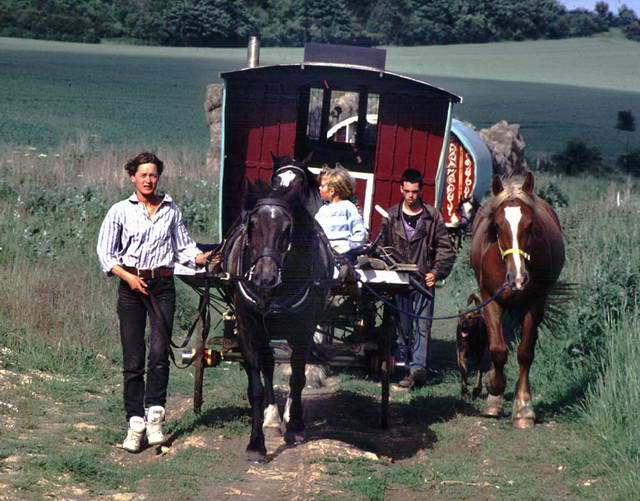 Clearly then many thousands of Travellers are disadvantaged by lack of security of accomodation. In this context it is difficult for people to take up employment opportunities and develop an economically independent life. Site security will go a long way to solving many of these social problems. Travellers are ingenious and resourceful and given access to some security will be a benefit to the rest of society. Many of the ideas of low resource use and alternative uses of land are coming out of the broad traveller-based scene and it has been the setting for many experiments in alternative forms of living. For example the Tipi village in mid Wales, the Tinkers Bubble project and Kings Hil Collective in Somerset where alternative living structures like benders are a low impact form of accomodation at very affordable prices. These initiatives where ‘housing’ is integrated with the environment in a context where a small but livable wage can be earned by farming or producing crafts etc. may be a way forward out of the tremendous housing crisis facing this country. We would hope that this allied with the enabling of travellers to access the planning system will prove a useful stepping stone to the future.

However, access to the planning system remains elusive for most Travellers. Historically over 90 per cent of applications for sites are turned down by planning authorities whilst 80 per cent of ‘normal’ planning applications suceed at the first hurdle. Of those Traveller applications which do reach the appeal stage fully two thirds are lost. Additionally recent Government policy rules out Traveller sites in Green Belt, Areas of Outstanding Natural Beauty and other special categories of landscape. This effectively puts an enormous slice of Britain outside the reach of Travellers – even supposing they had the money to buy land and pursue applications. This amounts to an apartheid within our country where the very policies which a government decides to introduce exclude and confine a proportion of our population to particular parts of the country. Only by being illegal can Travellers dwell in these areas. 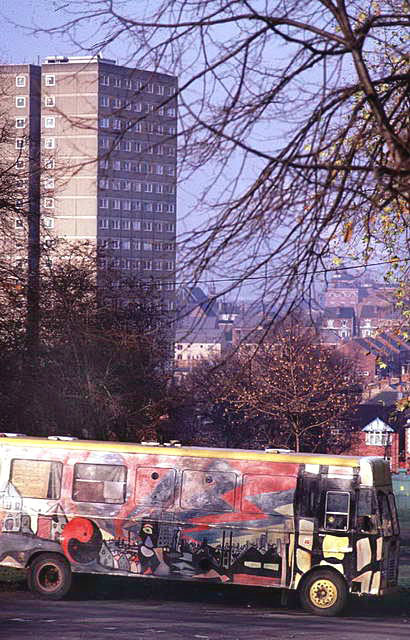 Local prejudice is whipped up at the mere mention of the possibility of a Traveller site – Cornwall has seen an extreme outbreak of xenophobia in the summer of 1994 when several sites for New Travellers were proposed by the county council – the local press abounded with headlines like “Worse than the Black Death” and “Spongers Scoundrels and Wastrels”. Yet there are sane, coherent and cost effective solutions. The development of networks of small low impact minimal facility sites to be occupied for 3-6 months out of any one or two year period would be extremely cheap in comparison with the 25,000 pounds spent on each Traveller pitch in standard local authority accomodation. Such sites would be allowed to recover during the time when they are clear. Alternative living settlements such as bender villages integrated with the local environment in a permaculture or agricultural context will go far to providing another solution.

All that is required is the political will and far sightedness of local councillors to see that the problems of the rural homeless will not be solved by conventional means. Urban poor will continue to leak out from the cities in seeing a new and better life on the road. All of these people require and need recognition of their needs by a planning system which all to often is characterised by bigotry and prejudice in its design and performance. Friends, Families and Travellers aims to try and change some of the attitudes towards travellers and provide advice and support to them in their fight for recognition as having a right to live peaceably within our country like the rest of the sedentary population.