One man and his dog

11 years ago Paris aged 30 came to Britain. First of all he lived in the bustling city of Southhampton. Never staying anywhere too long, he moved from one accomodation to another. However, as a trained tree surgeon, after 5 years of living in the city, he began to get a yearning for the countryside. He bought himself an old Sherpa van with a Sprite trailer, hit the road and never looked back. 3 years ago Paris signed off the dole and finally became self sufficient, contracting himself out as a tree surgeon. ‘The dole was far too much work for too little money’ he says.

He later sold up his starter rig, bought an old Leyland FG, totally did it up and then sold again. Now he is the proud owner of this Bedford RL which he has had for six months. A 1957 4 wheel drive ex army wagon – it has proved to be the ideal home for a single man. Again he kitted it out himself, and indeed has not yet finished (have you ever!)

Once the back is lowered, he is totally exposed. Fine on a sunny day, but not much good for the long drawn out British winters. He plans to construct a back wall, with a door and stain glassed window to boot. Prominent features in this ideal home are of course the burner, which he found poking out of rubble in a derelict house, his didgeridoo, which he is just beginning to master. I can do the circular breathing, but just get into the different sounds it can make says Paris.

There is a beautiful blackthorn walking stick which he just found on the pavement, having a magpieish with blades, has artwork by his former girlfriend Rachael, and a small montage of photos of sites and demos he has been on. What are the good things about living on site? I ask him. ‘I love the community atmosphere’, always move away from the people who aren’t! 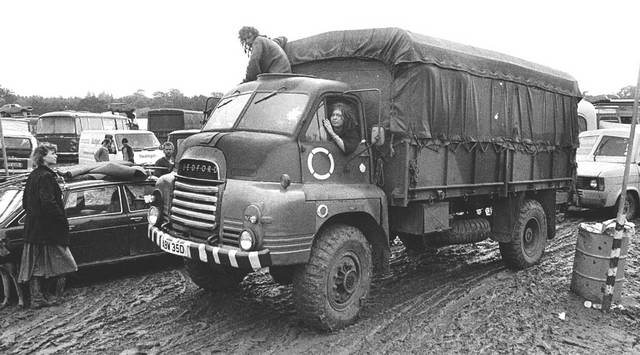 I also get great satisfaction from the fact that I am a home owner and build my homes myself. When asked whether he takes part in any of the roads protests Paris says, ‘Well I plan to go to Australia, so selfish though it may seem, I don’t want to get in any trouble. I’m a tree surgeon and love trees, but I am not from this country so feel no pull to save it.’ No worries Paris – your mobile ideal home is a living example to us all that freedom just about exists in this country still!