A traveller reviews some issue around land rights, just where can we be?

A few years ago, I travelled to Stonehenge to watch the annual gathering of a strangely dressed tribe of itinerants. They came from all directions, in Range Rovers, vans and helicopters, thus preventing people, within the law, from reaching Stonehenge. Under Common Law, the ‘possibility” of an individual being a ‘possible” cause of someone else’s ‘possible “Breach of the Peace is enough for them to put you inside. Unable to contain my curiosity, I walked up to a barrier and asked one of pilgrims why. Why the numbers, the machinery, and the monumental expense?

At first he looked lost, and stood in puzzled silence beside his road cones and stripy tape. Then his brow cleared. “Last year,” he told me, “there was human excrement left in the field.”
Lately, the police force’s revelry at Stonehenge has been facilitated by provisions of the new Criminal Justice Act. They didn’t make a lot of difference, as the police were using these powers at Stonehenge even before they existed. The official reason for this six-figure show of force is not the lack of a Portaloo, but the damage the visitors would do to the monument if they were allowed in. A unique and archaeologically famous Bronze Age boundary ditch, which, despite years of pleas and warnings, is filled in to make a tank track. It can add this victorious manoeuvre to an impressive tally of enemy installations it has damaged or destroyed on Salisbury Plain, including longbarrows, roundbarrows, tracks and dykes. As on previous occasions, the ministry has been politely asked not to do it again.

The high jinks at the stones illustrate an absurdity that prevails all over Britain. Not only at Stonehenge, but in almost every corner of the countryside, we are shut out of the land which once was ours. The reasons for our exclusion, while appearing robust from a distance, behave rather as the stones are said to do. They crumble as one approaches them.

As the ethics of enclosure spread further, now penetrating cities as well as the countryside, increasing numbers will find that they are trespassing on the planet. 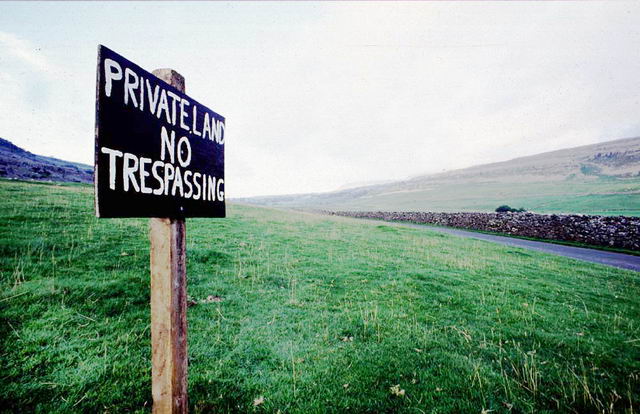 Whenever I am caught trespassing on a large estate I am told I’m intruding on the owner’s privacy. It is of little account that the owner may live in a wholly different part of the country or that I may never come within sight of his house. By crossing the boundaries of his land, the gamekeepers tell me, I may as well have stepped into his living room.

This hyperbole exposes the weakness of the argument. Our homes and their immediate surroundings are, of course, our private domains, and most of us are content with that. Why a large landowner’s need for privacy is so much more pressing than ours that it should extend to a substantial proportion of Britain has yet to be adequately explained.

Visitors to the countryside, we are told, damage landscape features and destroy wildlife. Well, the ramblers have obviously been hard at work, for huge swathes of countryside have, in the last few decades, lost all their hedgerows, ancient woodlands, downland, watermeadows, heathland and archaeological remains. In many places there is hardly a feature remaining to arrest the eye. It is, in reality, because we are excluded – not only from the land itself but also from the decision-making processes affecting it – that landowners have been able to make a clean sweep of the countryside, replacing our history and sense of belonging with what some have proudly described as a factory floor.

There are places, like Derwentwater and Dovedale, where the pressure of numbers does damage the land, and there are others where the fauna or flora is so vulnerable that it can tolerate no intrusion, but these conditions are rare and localized. They fail to justify our exclusion from the rest of Britain. Some visitors to the countryside do, as landowners claim, damage hedges or frighten livestock, but restricting these activities (and there are plenty of laws with which to do so) does not necessitate excluding the harmless majority. We don’t ban everyone from using the pavements because a minority of passers-by spray graffiti or break shop windows.

The gamekeeper’s penultimate resort (the last is always that he’s bigger than me and legally empowered to throw me off ) is that we have an adequate network of footpaths, from which there’s no need to stray. Regrettably, many of the most charming and intricate corners of Britain are wholly inaccessible by public footpath. Indeed it seems that while some landowners have allowed us to walk across places they have destroyed, they have largely succeeded in keeping us out of the places they have chosen to preserve.

Even this inadequate network is under attack, as, after years of obstruction by means of fences or ploughing, footpaths are extinguished on the grounds that no one uses them any more. Perhaps more importantly, one visits the countryside to escape from the constraints of dedicated space, the narrow regimentation imposed by the pavement, the office or ten square metres of garden. Keeping to the footpath does little to relieve our sense of confinement.

As one examines the ethics of ownership, it becomes clear that excluding people from the land is not, as landlords suggest, a duty, but a privilege. In buying a swathe of Britain you buy the right to exclude other people from it. The exclusive use of land is perhaps the most manifest of class barriers. With physical exclusion, one obtains a guarantee of social removal from the common herd.

The rest of us are, quite literally, pushed to the margins of society. Having confined us, through centuries of enclosure, to the cities, most landlords now intend to keep us there. If we enter the countryside we must sneak round it like fugitives, outlaws in the nation in which we all once had a stake. As the ethics of enclosure, propelled by the Criminal Justice Act, spread further, now penetrating cities as well as the countryside, increasing numbers will find that they are trespassing on the planet. 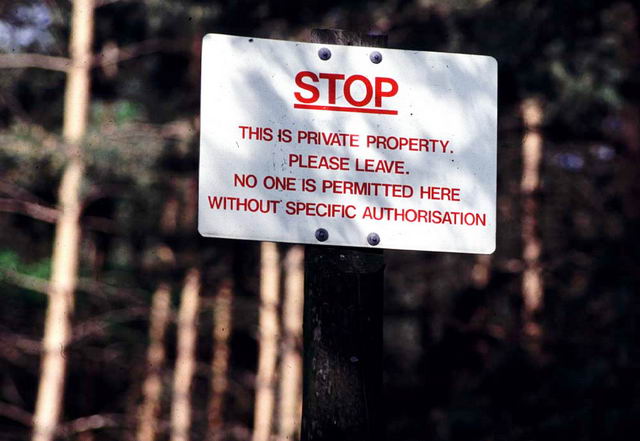 It is, in truth, not we who are the trespassers but the landlords. They are trespassing against our right to enjoy the gifts that Nature bequeathed to all of us. We must challenge this intrusion by demanding a statutory right to roam, which would require the owner to produce a good reason for excluding us, rather than requiring us to produce a good reason for being there. In the meantime we should, like the people trying to enter Stonehenge, heed John Major’s call for a classless society, by trespassing in the countryside as often and as comprehensively as possible.