They have a traffic problem. Major freight continues day and night along the winding two-lane road it sits along. So along comes a knight in shiny Toyota, the Department of Transport – those unhappy, lost souls whose function in life is based around pollution, noise, devastation and general disrespect for human life. The Department of Transport (DoT) offered a solution – a by-pass.

Now this here by-pass did not only run parallel to an existing under-used railway line, it also, when finished, would join up with another soon-to-be-finished by-pass to create a huge Euro-route running from Belfast to Dijon, which the DoT politely forgot to mention to the residents of Batheaston. Oh yes… In this new by-pass creation, some of the oldest badger setts in the country, miles of water-meadows packed with a huge variety of trees, plants and wildlife, hundreds – maybe even thousands – of old and very old trees, a large percentage of one of Britain’s finest ancient and magical hill-forts would all be destroyed. It would seem that Solsbury Hill would be almost decapitated. A dangerous thing to do to a hill of such power.

Word was spread and a call of “Aruga!” was sent. So a truck set off filled with hardened fluffy eco-warriors both female and male, all refreshed from a Summer Equinox gathering at St. Catherine’s Hill, Winchester – home of the once-unspoilt Twyford Down. It arrived at Solsbury Hill three days before work started. Already on the hill were members of various Earth First! groups, a couple of locals and a Donga or two living in tents and benders. Some of them had already been there for over three weeks.

On our arrival, a house near the top of the Hill called Baytree Cottage was occupied before it could be demolished. Its drive was becoming a site for living vehicles. Word was spreading fast, and warriors of all shapes and sizes were appearing all over the hill. 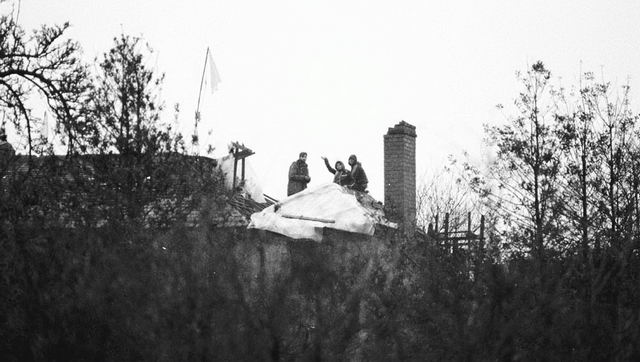 Much rain fell and much muddiness prevailed. Benders were appearing all over the place and camps were set up. For the time being, the campaign office was in a fairly-local pub, but only accessible at certain times. Daily work-stopping actions down at the ever-growing works-compound were good fun and very successful. But we soon realised that more than just digger-diving was needed, and plans were formulated. A bungalow halfway up the hill was occupied and became the new office. Phone lines, walkie-talkies and photocopier started appearing.

Things were moving fast. The imminent destruction of the water-meadows loomed and during one particular, powerful, day’s digger-diving and general work-stopping activities, a few people took the initiative and fenced off the threatened land with bits of string, while a few others set up tents. Using section 6 and 12.2 of the Criminal Law Act of 1977 (which apparently allowed us to take back land if a structure was placed upon it and it was fenced), this bit of land became ours until the relevant court proceedings told us differently.

So, with the removal by minimal force of a couple of trespassing security-men, we sat back and rejoiced on what was now by British Law our land.

So all present began to feel the magic of the Hill, and made ourselves busy reclaiming our land from the ever-so-surprised security forces employed by the DoT.

Down in the water-meadows, the huge poplar trees and other assorted trees next to the River Avon had been given a reprieve. So up went hammocks and a tree-house – some positions only reachable by terrifying climbs using ropes. On the ground, a large communal bender went up. And thus began the Battle for the Water-Meadows.

Over the road from this new camp was a section of wood next to a private school. In this wood lived a gentleman-artist who for the last three years had enjoyed the peace, the sound of the birds and the rustle of the various animals who shared this wood with him.

DoT plans were leaked – that this wood was soon to become a roundabout. So with the gentleman wood-dweller’s permission, a few of us moved down with him into the wood in order to protect this area of timeless, outstanding beauty. This camp soon be came known as “Fluffy Land.”

Powerful things were beginning to happen as everyday occurrences. All over the Hill, pixies played night and day. As more turned up, so did more security appear guarding the machinery at night and trying to stop us storming the work-sites during the day. For the first few weeks, we ran circles around them, happy, strong and defiant. It all seemed so easy; yet I think we all knew that it was only a matter of time till the DoT made their move.

Their move began slowly at first, with eviction notices arriving for all the sites – a mass of bureaucratic and unimpressive paperwork ordering us to court a week from their arrival. So over to our legal department – or rather the few of us who had any legal knowledge. For a time the scene of the main battle was within the walls of the courts of justice – for those with smart clothes anyway. For the rest of the time, we ploughed into what was fast becoming not only an art but a craze – digger diving.

The latest word from the courts was that they had won back the Water-Meadows, and had demanded our instant withdrawal. Nothing happened for a day or two, then in they came. It began early in the morning with nutters with chainsaws cutting all the trees they could get to. Already many were occupied and word spread over the Hill fast. But, even so, many trees were felled, and the Battle for the Water-Meadows took on a whole new pace.

A surreal scene of yellow jackets worn by the security-men and -women, hard-hatted bailiffs, tree “surgeons” armed with chainsaws, new high fences being put up by labourers, huge machines of death waiting to pounce, uniformed police acting like they had the situation under control. We were everywhere we could possibly get to – the top of the trees, under the machines, in policemen’s faces.

The battle raged and raged until, on the ninth day, the final exhausted tree-sitter was unceremoniously cut out of the hammock from which he had not moved all this time, by the use of cherry-pickers, and promptly arrested and carted off. Before he had even left the site, the final tree was felled, and the Water-Meadows were reclaimed by those land-rapists, the DoT. The battle raging for so long brought the mass-media, and the siege became daily news.

The determination, bravery and peaceful strength of these front-line warriors sent out a message of empowerment to millions of dissatisfied people which exploded across the country, hugely enlarging the already-growing masses of eco-warriors – free-thinking people across the land. While this was going on, the battle still raged in the court-rooms, and a small but powerful victory was ours in the adjournment of the eviction-hearing on Fluffy Land till the end of May – due to the fact that the solicitor claimed “travellers’ rights” and not “squatters’ rights.” A month and a half reprieve that definitely was a victory because we knew that they wanted to construct their roundabout as soon as they possibly could.

The town of Bath and the surrounding villages such as Batheaston were beginning to feel the vibrations from the Hill, and had varying reactions, some non-committal, some anti- and some for us. Some of the most magical times were when we met a local and their original reaction was turned from one of negativity, such as fear or mistrust – even anger.

By our words and deeds we changed their often-conditioned opinions, and they then came to be, at the least, allies – but more often strong friends. Sheer magic!

Life on the Hill went from one extreme to another. People physically and mentally battered were everywhere. Battles were being fought all over the Hill, both outwardly in defence of the Hill, and inwardly as or tribal community battled to survive. The Hill’s power became more and more apparent as our daily non-violent battles took form. Such unity and strength was felt by all. Good, amusing things were happening all the time. One particular one was the presentation of the keys to a rather fine country retreat known as Worley Lodge, whose owners were forced to sell by those swell guys and girls the DoT. This house, being over four miles from the Hill, did not seem much good in helping to save it, but became a beautiful healing camp and zone for parties – which happened to fit in rather well with the Beltane gathering on the Hill.

Shortly before Beltane, the campaign exploded onto a new level, as the Hill and the people upon it became household news. Several new people arrived who openly acknowledged their anger and the injustice of the obvious corruption at high levels which had occurred in order to allow this wanton destruction.

Some of these new faces brought with them fame, and this of course brought in more media still – and with it much controversy across the Hill. But it could not be denied that it was a powerful tool.