I arrived at Twyford Down one cold April night unprepared either physically, emotionally or psychologically for what was about to begin. A magical journey of over two years, that was to change my life and affect the lives of everybody near to me. I had come to visit Anna, my mother – a hippie die-hard with attitude – at the motorway protest camp. Living in a big bender, a tarpaulin stretched tight across bent hazel poles, she’d blagged a camera off the BBC to record the actions of the tribe of earth-scented, dancing pixie-folk who had seen through the veils of hypocrisy that govern our stolen lands.

They had pledged themselves to protect and honour our Mother the Earth with their bodies and minds. Their bodies as alive as the hill they were protecting, young and agile to dodge the security men and to dance on bulldozers. Their minds knowledgeable, their mouths eloquent in court, defending their actions for the planet, and enchanting and musical around the fire at night. Many were gathered in the camp: Earth First!, Friends of the Earth and local people. But for me the tribe stood out and spoke to my spirit. Their conviction of “No more bullshit, your planet is dying!” echoed my own. At last I had come home.

I had been struggling to free myself from a six-year hard-labour relationship with the father of my two daughters; and now I returned to my house and former life, packed up a few possessions, rescued my fairy-princess daughters and left, to return to the people of my past.

The landscape around Winchester, a countryside lost, its history hidden and ignored, unveiled itself to me. St. Catherine’s, for millennia a gathering-place of many tribes, a sacred hill ringed with trees – a meeting place of many paths and old trackways, linking hills and monuments the length and breadth of ancient Britain. Trackways trod deep into the land by travellers’ feet. As I learned more of the land, my anger began to rise. History was repeating itself. Two thousand years ago, at the beginning of this age, tribal leaders gathered at this place. King Arthur, Queen Boudicca – pagan Celtic warriors, protectors of the land – fought against the Roman invaders and their straight roads and square towns, that threatened our already highly-sophisticated culture.

It was the beginning of the end for Britain as the patriarchal tyranny of the Romans, and later Roman Christianity, supplanted and suppressed the Celtic goddess, symbol of the Earth – symbol of respect for plants, animals, people, the land itself; for feminine wisdom and for the whole inter-connected cycle of all life.

We drew our inspiration and life from the land, as we protected it, feasting on the natural bounty of the Earth: seasonal crops, berries and edible mushrooms. We drank from clear springs and our clothes were worn till they fell apart then stitched back together with colourful cloth. Smoke from fires permeated our clothes and dried the sweat. The lack of toxins in our bodies produced the sweetest alluring aroma and became a familiar scent, mocking the deodorant of over-chemicalised bodies.

The Romans wanted to civilise us. They also wanted straight roads – and lots of them. The Department of Transport, DoT, justified this devastation to build a small bit of motorway for 27 million – just to cut travelling time from Southampton to London by five minutes, in a country with a recession and a perfectly good but under-funded transport service.

These roads are sold to the people through lies. All over the land to the north, south, east and west, they plan to cover one fifth of the land with tarmac, because they expect traffic to double in the next decade. To do so they plan to destroy 800 ancient monuments, 160 sites of special scientific interest, 12 areas of outstanding natural beauty, 30 to 40 National Trust properties and parts of 2 National Parks. All this coming to a landscape near you by the year 2,000!

The DoT has the power to compulsory-purchase your house and your land, to bulldoze it in the name of progress, to destroy irreplaceable ecosystems, and to lie about the results of environmental impact assessment reports and geological, archaeological surveys. The Government benefits financially. It seemed as though a conspiracy shrouded this motorway. My sense of justice exploded.

Our Tory Government has just had its wrists slapped for foreign arms-trade, causing unknown massacres in countries we are told nothing about; and we the Great British Empire rest with a free conscience. Individual Conservative MPs also have shares in, and sit on the board of, road construction companies, Tarmac, ARC, Group 4, other car-related industries. Oil and taxes. So, to me, it looks pretty clear that the top few percent of Britain gain millions from ripping up our countryside, filling the atmosphere with poisonous gas, then imprisoning us for caring about our future.

The magic that surrounded the tribe now engulfed me. Advertising and consumerism shouted at me, full of lies and something more sinister – a corruption, and imprisonment of our very souls!

I could never go back. Twyford Down has finished. But what had started with a small group of people ended with a movement of self-governing Eco-activists. 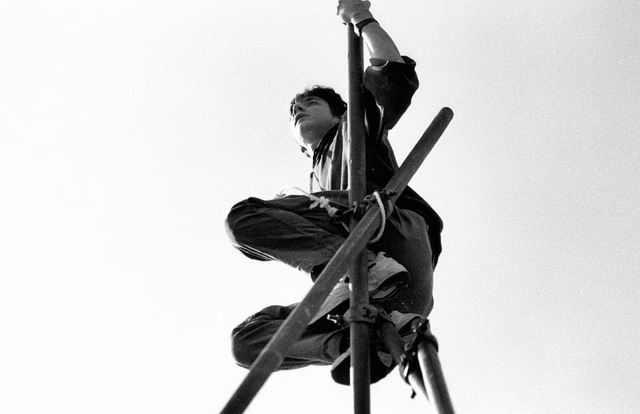 I spent the next year on different campaigns, learning the relevant skills of tree-climbing, abseiling, barricading, mediation, ranting on stage, video cameras and our rights in the law – and also exposed myself to the enormity of our environmental crisis. I watched the media manipulate and suppress, while people got trashed and lies got buried. And we celebrated when brave reporters backed our cause sending us loads more support, and when the information got out.

People could see they were not alone, and that individuals can make a difference with Non-Violent Direct Action. Britain was getting off her knees, and saying “NO!” School children, doctors, lawyers, celebrities, famous bands, elderly, retired and unemployed – all rejoiced at finding kindred spirits. We had a party to celebrate, that’s still going on now. We have staked out the entire country with successful camps on strategic motorway sites, costing the government millions. They had to listen and they did. One third of roads were cut.

The Tribe have dispersed now, meeting randomly. The magic of meeting up with people on the road is special. We always have adventures. One day we will be on stage with a famous band ranting civil disobedience to thousands, the next, filming the massacre of an ancient woodland. I have witnessed young ex-hard drug abusers rediscovering meaning in their lives, dancing on bulldozers in tribal costume, chanting “Rainbow Warriors unite!” I have experienced feelings of compassion for violent security-guards and have been rewarded with their resignation.

All the while, my two fairy-princess daughters have been entertained by a tribe of pixies – learning music, living on the land, feeling its power, freeing our mind and spirit through truth of purpose.

My mind has merged with the ancient tribes of the Americas, aboriginal and African peoples of the planet, the wisdom of our ancestors and the secrets of our true past; revealing a new future – not one of mass destruction, but the turning of the tide. The earth-changes are subtle, and slowly people’s consciousness is rising.

They are asking questions and learning respect for ourselves, others and for the Land.