It was early March 1994, and I was living in a cottage on the outskirts of Bath. I did not know it, but I was on the verge of an experience that would drastically change the course of my life. I was about to be re-educated, and my tutors were a group of people who lived a life so different from my own that when I first met them my initial reaction was that of shock. They came to fight against the construction of a road that was being built fifty metres away from my home. The issues surrounding this road and the entire road-building scheme in Britain are fundamental to the way that I live now; but it is not the roads I want to tell you about.

I want to tell of a group of people who fought a battle using smiles and humour; who opposed force by absorbing it rather than throwing it back; who stole the hearts of their local supporters with their almost painful-to-watch love for their Mother, the Earth. They arrived slowly over a number of weeks, their matted hair and earth-coloured clothing giving them the appearance of an ancient Celtic army warped forwards in time and preparing for battle.

Within minutes of meeting the first arrivals, I knew that something very special was about to happen. There was a burgeoning feeling of excitement. These people intended to change the world.

My first visits to the abandoned buildings and protest encampments in which my new neighbours lived were brief. I brought chocolate cake and received warm welcome. Slowly, some of the protectors became my friends; and that is when my education began. Rob the Didge taught me how to value the through-flow of possessions and valued objects, the joy of giving and the alien ease of quelling aggression with warmth, love and acceptance. A woman called Niamhy showed how a person can move through life constantly emanating palpable love. For months. 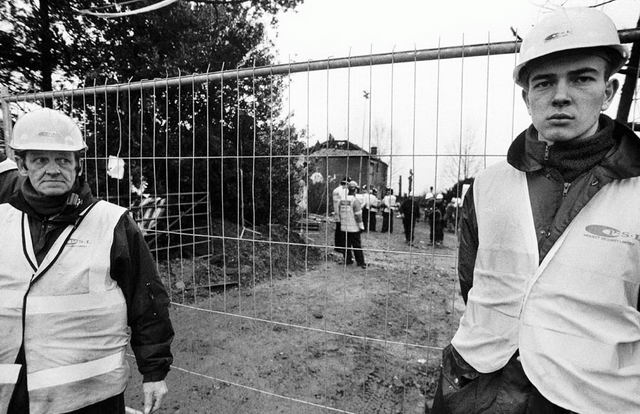 I bathed in her rays. A man called Kit screamed his masculinity so loudly that I recognised the male power within me that had sat dormant for years. This male power helps drive me now, no longer ashamed. Wanda, Indra and Emma showed me a female power that generated such levels of respect that I am still reeling from their impact. Egalitarianism at work.

My education is still continuing now. A man called Raven still appears regularly at my door. The things he teaches me seem preposterous and outlandish, but I suspect that his ideas will soon meld with my own. The lessons that I have learnt are many and various, and as I sit now, I feel enriched by the time that I have spent with people who truly live their ideals rather than just espousing them.

Today is my last day as a County Council community worker and I am glad to be leaving. My work has been valuable, but always limited by the constraints of a system that produces the need for commmunity workers in the first place. I am becoming immersed in a new and growing culture – the culture of a dynamic and caring community where everybody is a community worker. My new community practises putting bodies where beliefs are. We work with the principle of personal empowerment. …….. And we are at the cutting edge of change.