A Report from Simon Davies of Full on Films

Recent events in Stanworth valley, scene of the M65 protest, posed one question. Who were the specialist climbers called in to remove the protesters from some 40 tree-houses? Suspicion and conspiracy theories always swirl around protest-sites, and in this respect Stanworth Valley was no different. On the first day that the climbers arrived, everyone was speculating on their identity. Police, Army or SAS were the most popular theories; but the presence of supervisor lan Harrison sporting blonde dreadlocks (“credlocks”) confounded this speculation. Everyone knows that undercover police or covert mililary personnel have hair: short, regulation; shoes: black, shiny; fashion sense: non-existent, Neanderthal.

As the tree protesters encountered their rivals 40 feet or more off the ground, the truth was revealed. They were professional climbers after all, recruited from mountaineering, caving and rope-based sports. Mr Harrison explained that having dreadlocks was a smart career-decision. Trendy hair ensured that he got photographed more often, and as a result received more work. His claim to drive a Maserati seems to back up this “dread=bread” equation. Someone should explain this to Her Majesty’s Government who are determined to outlaw outlandish hairstyles as an impediment to job-seeking. In fact the dreadlocks were a matter of serious debate. Eco-protesters regularly worry attendant police officers and security-guards by informing them that their children will grow dreadlocks and disown them.

When Mr Harrison arrived on the wrong side of the fence, there were murmurs of confusion. It was bad enough to discover that climbers famed for their love of the natural environment, should be taking sides against eco-protesters, but a turncoat climber sporting dreads was too much to bear. Dreadlocks on the enemy incensed the helpless ground-support who screamed “Judas!” and “You’re not worthy to wear dreadlocks. Shave your head!”

This in turn galvanised the tree-protesters to such an extent that they put up a spirited defence against the specialist climbers and their sidekicks, the non-specialist but very enthusiastic bailiffs. So spirited was this defence that toward the end of day one, two climbers resigned and the others renegotiated their pay. This seems fair enough as it can be revealed that the company who (allegedly) employed them, Richard Turner Associates, informed them that they were undertaking “rescue work.”

This was unsporting as it was stealing the protesters’ thunder. Surely it was they who were doing the rescue work; that of rescuing an ancient wood from the chainsaws of a road-crazy government.

The climbers had only discovered that their work involved something a little more than “rescue” when they arrived on site. They were then told that they needn’t worry because the peaceful protesters would be quite happy to surrender the moment they saw the red helmet of a specialist-climber appearing in the vicinity of their lofty perch. Climbers are obviously gullible folk because off they went boldly up the trees only to discover that actually the protesters were not going to surrender, and in fact were quite happy to make things difficult. This involved baked beans and not staying still. It was at this point that the climbers demanded a pay-rise. Who can blame them? They finally settled on the sum of 150 per day, plus expenses, and continued their assault on the trees.

When their work was over, the climbers cheerily bade their foe goodbye and threatened to see them in Honiton. Honiton will probably be the site of the next tree-protest, so it appears that the DoT have got themselves a relatively-cheap, mobile anti tree-hippy squad. Unfortunately for the DOT, humans are blessed with the ability to learn from their experiences. Darwinians state that man came down from the trees and onto the plains. Eco-protesters have gone back into the trees, like it there, and are becoming rather good at defending them. Already veterans of Stanworth Wood are refining their tree-squatting and defence skills in the certain knowledge of a less than convivial reunion with the climbers. The DoT have also refined their system. Last year in Bath, they confronted some highly-motivated tree-defenders. The response that time was to litter the ground with piles of cardboard boxes in case of any falls, and send burly psychos officially described as “stuntmen” up in cherry-pickers to intimidate and wrestle with the protesters.

The”stuntmen” were good at violence and intimidation, but poor scorers on agility and climbing skills. Thus the tree dwellers at Stanworth learnt to make themselves and their new tree-village less accessible to all but the skilled climber.

A climber is more evolved than a “stuntman”; but the problem still remains. Once in the trees, how do you convince a protester to come down with you? Mr Andrew Wilson, the Under-Sheriff presiding over the Stanworth Eviction, went to great lengths to convince the general public that protesters are violent and dangerous creatures. The police were big on showing the Press metal stakes that had allegedly been thrown down at police officers – and even Molotov cocktails were mentioned. This was obviously designed to deter “ordinary” citizens from supporting these “dangerous anarchists.”

Filming up in the trees, as opposed to the restricted view given to the mainstream media, told a different story. We have film of bailiffs drawing knives on protesters, of life being endangered by the slashing of safety-harnesses, and of protesters almost being lynched by over-zealous bailiffs attaching nooses to them in an attempt to haul them out of the trees. I watched in horror as a gentle protester called “Badger” was lassooed round the ankle and almost hauled out of a tree high above the ground. He looked for all the world like a timid endangered species being violently persecuted in his natural habitat.

This video evidence is in direct contradiction to the smooth assurances of Mr Wilson and information fed to the Press. It will be used in an upcoming court-case against him. However, the issue is less about embarrassing the Under-Sheriff and more about setting the parameters of what is and is not acceptable behaviour in confronting British people peacefully protesting in trees. 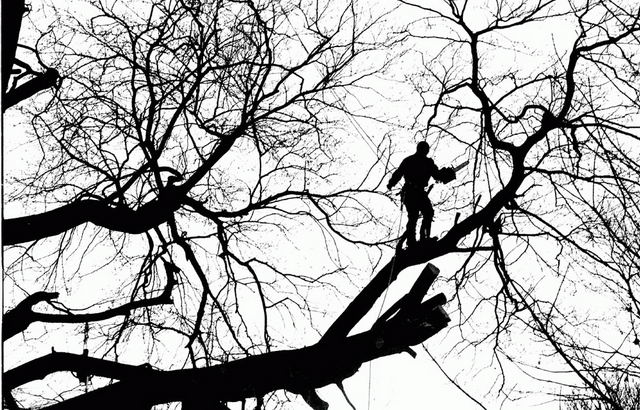 We should not need reminding that we live in a democracy and that we have the right to peaceful protest. Road-protesters live by the creed of non-violent direct action. By smearing them as dangerous, the authorities are obscuring and concealing their own heavy-handedness. One protester came extremely close to death in Bath last year, and I would hope that we do not need a fatality before we debate what is reasonable force.

I am also sure that before we witness another tree-protest, the climbers would like to have a more detailed job-description…