Reclaim the Streets in Nottingham

Have gathered a few stories of the Reclaim the Street events in here in Nottingham. I think we had 3 of them that I remember.

A crowd gathered spontaneously in Nottingham’s Old Market Square (known as Slab Square to locals) to protest at car usage, though in the end there were fewer people than one might have expected, probably only around 150 to 200. This made it hard to get going, when the crowd again entirely spontaneously decided to exercise their right to use the roads they were turned back at the first two attempts to get out of the Market Square. 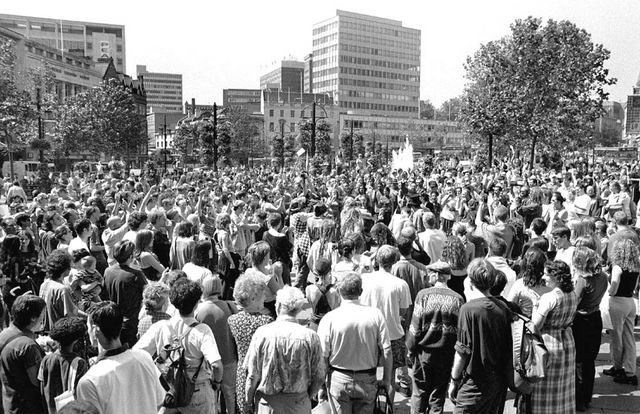 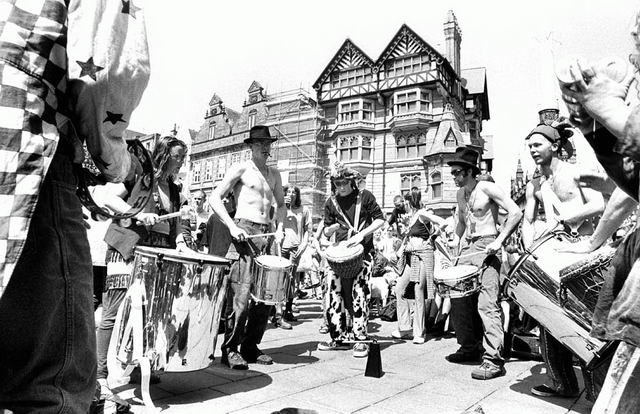 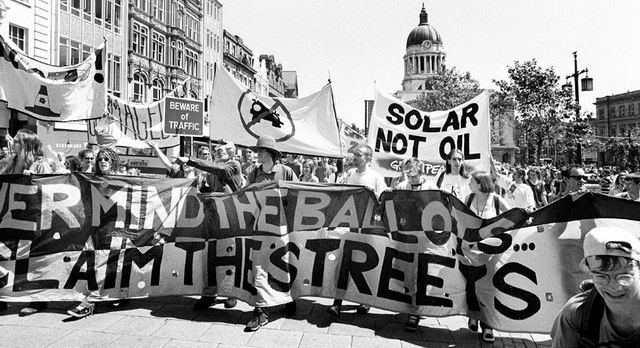 The first was up Friar Lane towards Maid Marian Way, a 1960s dual-carriageway which obliterated the former mediaeval quarter of Nottingham, and which until recently planted with shrubs was widely believe to be the ugliest city-centre road in the UK. The second was towards Chapel Bar, which ends in a pedestrian subway so was pretty doomed as an attempt (for some reason the side turn down Mount Street was not taken).

Third attempt the crowd made it up Market Street to the Theatre Royal, a little bit of to-and-fro at the top but the leaders climbed over traffic islands to evade a police line. Stopped again within a few hundred yards at the corner of Wollaton Street and Sherwood Street whilst the leaders negotiated with police which way they could go. Shunted off down Sherwood Street, past the central police station (no hassle though :)), then back onto Mansfield Road, the main road northwards from the city centre.

Suddenly there’s a blast of music from in front and the walk was there! A bit of jockying for road space, the police forming lines to try to squeeze the crowd up (no pushing though) whilst people sat down in the road to establish the maximum presence. After 15 minutes or so it all settled down and all could relax, though all kudos to those who stayed sat opposite the police all afternoon to maintain the ground.

Someone was distributing chalks to all the children to draw on the road with 🙂 I heard that one van full of sound equipment had been stopped before getting there, but at least the one did get through.

For most of the afternoon it was really good fun and sensitively done on both sides, people were able to go in and out across the police line a couple of times to get food and to visit toilets. One child had his recorder and played, which lots of folk thought was great 🙂 By mid afternoon though, the police had hardened up and were not even letting people in to walk past the party on the pavement, even those not involved in it.

I was attempting to walk up Mansfield Road at the time and I remonstrated with a sergeant but was told the change in orders had come from someone at police headquarters who wasn’t even there and could not be contacted by the public. Tried a couple of other ways in but no dice – “Write a letter to him”, fat lot of good that does when the problem is here-and-now. I think I’m minded to make a complaint about that, as I was prevented from using the street by nothing other than the police, certainly not the RtS people, and the excuses the police gave about public danger and disorder were transparently false, as one could see even from the outside.

I didn’t see how it ended as I had to get a bus home. I was concerned that the police seemed, from my vantage point at a stop up the road, to be bringing in extra forces, and I hope that people were allowed to disperse peacably and without harrassment.

Still, the music was mostly good and to someone’s taste if not necessarily mine, and one could dance to it even outside the police line. I’m glad that Reclaim The Streets makes a stand against the promotion of vehicular traffic in our city centres and living spaces. Nick Leverton 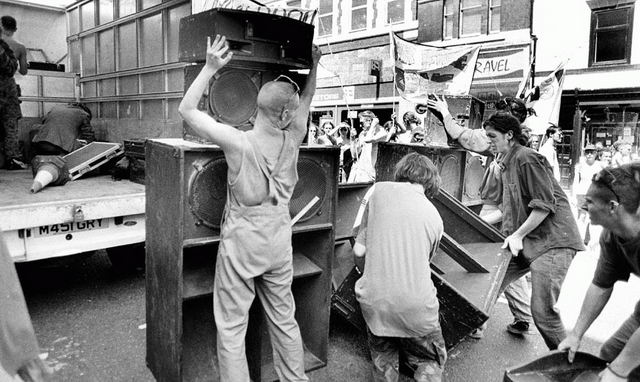 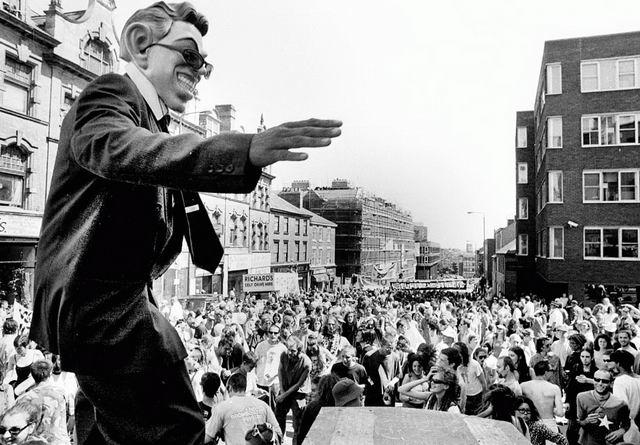 Ok, This was Nottingham’s third attempt at an RTS, the previous two being held aloft as the quintessential example of what an out of London RTS should be – well except for the 60 arrests last year.

September 18th 1999 – Once again market Square was the meeting point – by around one there was a crowd of a round 250 – a noticeable drop in numbers from the previous years, perhaps due to the extremely low key method of promotion this year, a word of mouth campaign directed almost exclusively to one small section of Nottingham.

But never mind about numbers because as we moved off it all seemed fine the crowd morphed into a long trail, and spread slowly down Nottingham’s roads. The chants began and once again dazed onlookers stopped and unleashed their ever hilarious mix of disgust, confusion, and/or delight…

The people up front, and behind a Reclaim banner, pushed forwards, or left, or right, depending on some whim, and the traffic slowly began to grind to a halt. At this point four mounted officaz, galloped out of some dim dark hold, and moved to block the road ahead. “Stop! Stop where you are!”, shouted one large breasted lady. “Fuck off”, shouted one krusty. So, it was down to a battle of cunning now, as the horses where moved sideways on so as to form an impenetrable barrier to the aggressively amused crowd. Unfortunately for the coppers, four horse lengths a street width do not make, and the crowd passed through, I doubt if some even noticed the horses…

Then the inevitable – a wail of sirens, a screech or tyres, a young child screams, a wolf howls…. Three fully laden riot vans rush round the corner and out jump the riot boyz… Immediately people are grabbed by their tops, then let go. The police form a line and try to stop anyone from passing – but of course a few do, perhaps 15 or so… so they go ‘right then…’ and jump back in the vans and speed off…The crowd continues with renewed happiness ‘Reclaim the streets’ and whooooops…And these are the main roads of the city now, the veins feeding the outer limbs pumping metallic globules.

Then at last we’ve managed, by great skill and cunning no doubt – to manoeuvre ourselves down a small street with a large police line at one end and no side streets – so, the crowd turns – but a second line appears ­ I even here an office shouting, with a voice tinged with far too much adrenaline – “we’ve got it now!!!”. So the crowd is trapped down a dull side road with no rig – I don’t know if the police intended to hold that position for long – still – their motives are mainly mystery to me…Some of the crowd begin, with fox like cunning, to convince the police that they are now bored and wish only to go home, but the police only growl and drool…
At last super stealth mode kicks in though as the crowd spots the long row of terraced houses, forming one length of our prison – obviously these houses have small alley ways – and as one the crowd begin to stream into these – what happened then has to be one of the most comic moments I’ve ever witnessed at an RTS – hundreds of people getting completely lost and disorientated down this maze of alleyways – bumping into crowds coming back the other way from dead ends or spotting groups darting up some other hidden ally…

The net result after ten minutes or so of hilarity was finding an opening approximately three meters behind the police line. The police, looking a bit dejected now – watched as the crowd streamed past them once more into the main road…

The pace seemed to pick up a bit now – and boiled down to an almost playstation like game of racing to the next junction before the police vans turned up to block the march…After a while the crowd began heading away from town and over towards the the NG7 area and the forest ground… Here a few final blockades where erected – but caused little difficulty… And then at last shouts of “surround the van, surround the van”, could be heard.

It was a little puzzling though – standing in the middle of the road blocking the progress of police vans, while all around people streamed past on the adjacent forest ground (a large open green area)… But sure enough it was no illusion – a van was parked up – next to the ‘park & ride’, and a crowd surrounded it – I could spot speakers being unloaded. As I got nearer and sat down on the soft grass to roll a well deserved fat one – I couldn’t help voicing the polices thoughts “Oi you cunts – we’ve just spent a hundred grand on this operation – now get back on the fucking streets!!!!!!” 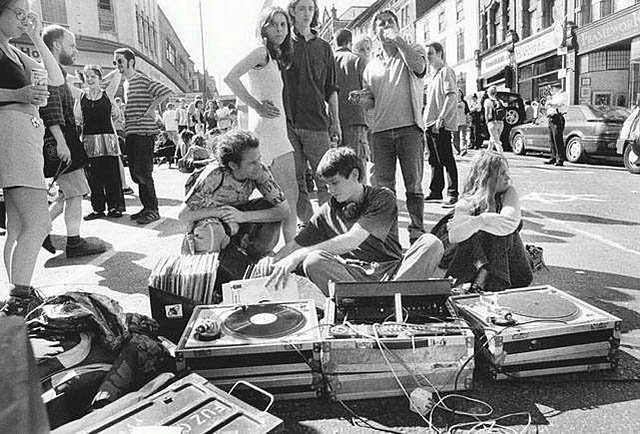 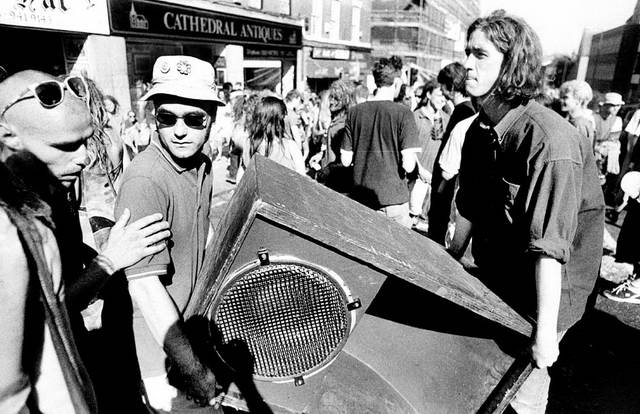 So the music started and a party was in progress – it was a good party – and it was nice to relax after the earlier madness. The local rag reported the event ‘Just an excuse for a party’…I don’t know for sure, we usually don’t need much excuse for a party at all…. And for all the reasons a gave at first I don’t want to criticise the organisers who have justifiable reason to worry…But it brings up a rather relevant issue I suppose – how many people at an RTS are there to save the world – and how many just want to get fucked and have a laugh – it’s tiring to stand in the face of excruciating opposition – and perhaps the only real difference that we can ever make is to ourselves, something the lost it hedonist does understand…I remember the fuss caused by a banner at one of the big London RTS’s – the banner read ‘They want to fight, we wanna dance”, opinion has ever crystallised down the lines of those who believe that banner, and those who want to turn the ‘fight’ of that slogan into the empowering ‘fight’ of the struggle…

One things for certain each RTS is different – and they each have a lesson to teach – and the lessons probably different for ever single person, for some Nottingham’s RTS will only of said “Arse, must not take so many pills”, for others it said, “What?”, and to others it merely whispered that it was all part of some wonderful plan. 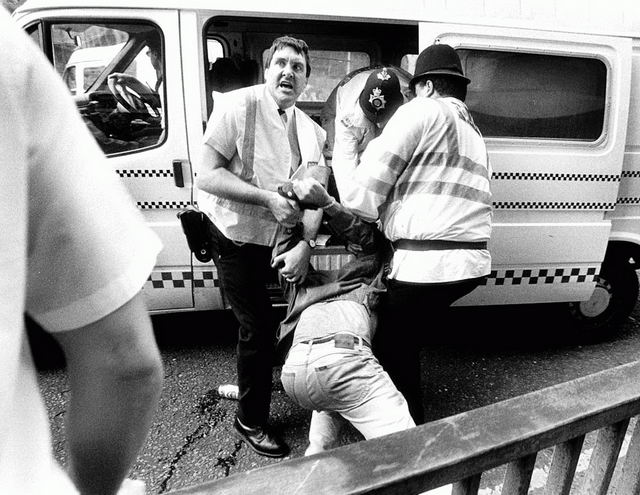 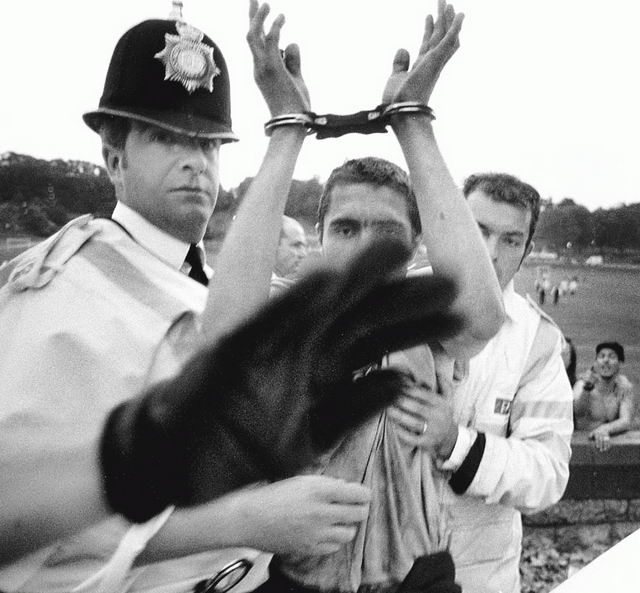 The Nottingham RTS on Mansfield Road was a first for me. I write to you now as a convert. I do not share all of RTS’s political views, but for me the point of the street party is to question the established hierarchy, encourage better policies on public tranport, and have a fucking good time. Where else can you dance ecstatically surrounded by police in broad daylight? When else do you see thirty-somethings, children, Big Issue Vendors and up-and-coming young executives discard their differences and share in a truly solid community event? The car will never be destroyed (not before we have really fucked the place up), and capitalist ideas of economic progress are here to stay. And there are positive things to be said for both. But I am an idealist, and hope that the continued RTS carnival will have some effect, might reduce the traffic, might encourage subsidised public transport, might see more city centres wholly pedestrianised. The important thing for me however has been to make me stop and see that it doesn’t have to be this way, that if I WANT to stop the traffic and dance all afternoon in the street I can. And in a street empty of quotidien bustle, noise and dirt, no-one can deny the atmosphere is more congenial than usual. 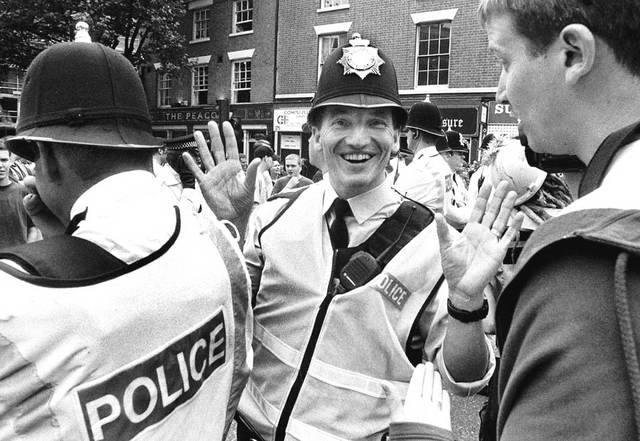 Back to RTS Events >>