The glass crystals hanging at the doorway of my bender peppered its canvas walls with myriad rainbows. It was another sunny, summer’s afternoon on Solsbury Hill. My bender was inset beside a hawthorn-dominated thicket about level with the communal bender. I would pass between them on my way up the hill to collect firewood from a fallen tree in the long grass of the next field.

On a typical evening, I would watch the sun go down over the opposing hillside, above and to the right of Bath city, while I cooked supper on the open fire. Then I would sit by its heartening flames and contemplate the world. There was a sense of “arrival” here. Where you had come from was as irrelevant as where you were going. You were simply “there,” in the perfect moment – there in a place of deep significance. The meadow diagonally down the slopes towards the campaign-office in the quaint community of Bailbrook, had been surmounted by a cairn of stones marked simply: “Genius Loci.” Spirit of Place. Directly down the hill was an archetypal country lane with lush dwellings (now disused), and, most significantly, Whitecroft Woods – tall, majestic beech trees that were part of the grounds of a country home, or rather a pile of rubble. Here could be found fellowship (as with our communal bender) – and usually a large pan of simmering vegetable stew.

There was a sense of perfection of lifestyle and perfection of location. We lived as a tribe – a “family” – close to the Earth… and Air and Fire. And the treasures inherent in the landscape were reflected in the people.

Kit stands out in my mind. He would belong as much to Celtic Britain as to our tribal society today. He is a figure beyond Time. I’ve never known Kit to be wrong. When necessary, too, he has always been able to harness aggression. Love, respect and awe – all these were engendered in equal measure.

And just as Kit was strong in his essential masculinity, so were figures like Vicky, Niamh and Nina strong in their essential femininity – “in their power,” as Vicky would say. I was surrounded by the archetypal force of the Tales of the Round Table! And that beautiful setting was fitting indeed… But the State, it seems, has no such sensitivities. 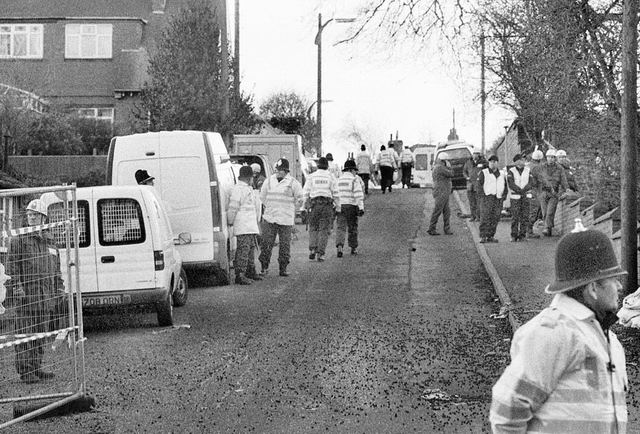 Whitecroft Woods are gone now! In their place is a massive road-working that has also obliterated the country lane! It tears across the terrain on the upper slopes of the hill – even across the spirit-meadow! And it promises even worse!

It promises din and rumble – asthma-causing fumes delivered by juggernaut. It promises nothing other than the basest commercial interests in their most blatant expression.

I have had much to contemplate around Solsbury; but this is beyond contemplation. It is like a dream that turns into a nightmare – a nightmare from which you cannot wake up. There can be no sense of values – and no sense of rights. To us, the trees of Whitecroft had earnt respect beyond measure. They had grown gradually and painstakingly from sapling to state of majesty, over a time-span beyond individual human experience. They were undoubtedly sacred – imbued with rights that could scarcely be equalled. I can never think of Whitecroft Woods now without a stream of tears.

But Whitecroft Woods, the “genius loci” of the meadow graced by uncounted wildflowers – how can forces range against such perfection with impunity?

The ancients knew secrets. They knew that sacred sites possessed their own intelligence. We – the “Old People,” also the “New People” – know these secrets, too.

We have felt the spirits come, felt them enter us. We have felt our own intelligence and knowledge being harnessed in a countermeasure against the desecrators of the land. “Sleaze” came as no surprise – only the word was unfamiliar. The gradual disintegration of those forces ranged against the “Genius Loci” began on cue. “How could it be otherwise?” For every action there is a reaction…

But something positive, too, has built up inside us. After Twyford Down, they talked about a Dragon being unleashed. Our “Dragon” is one of moral – and now intellectual sovereignty. That cannot be doubted now. Out of the fight to save Solsbury and other savaged resources has come the Land Reform Movement. There are few forces stronger than the restoration of sight to the blind. It is becoming incrementally obvious now that the land belongs to the People – and not to its exploiters. The opposition cannot fight revelation in its purest form.

Last week, I told one of the security-guards that one day we would come back – maybe not till another lifetime – and we would pull up this road.

Whoever does this will restore the balance of the sacred land of Albion.