The Mutoid Waste Company started doing parties in North London in the mid eighties. These parties started off as an excuse to fund Mutoid Waste’s industrial artistic works which consisted of sculptures and motorised vehicles made from scrap. 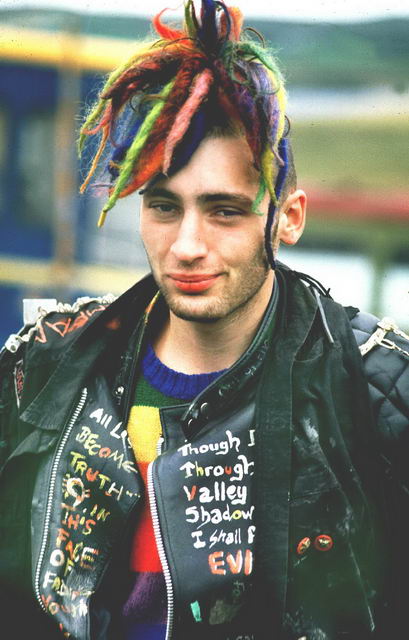 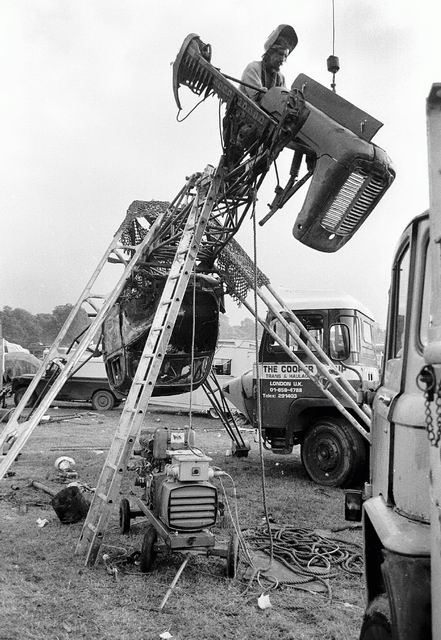 They were essentially massive parties in squatted venues, the most famous being in an old bus depot in King’s Cross. The original music policy was punk, psychedelia, dub reggae and other assorted weird stuff. When ‘acid house’ arrived, the parties gradually transformed themselves into giant acid parties until the police forced them to move out of London and then Britain. 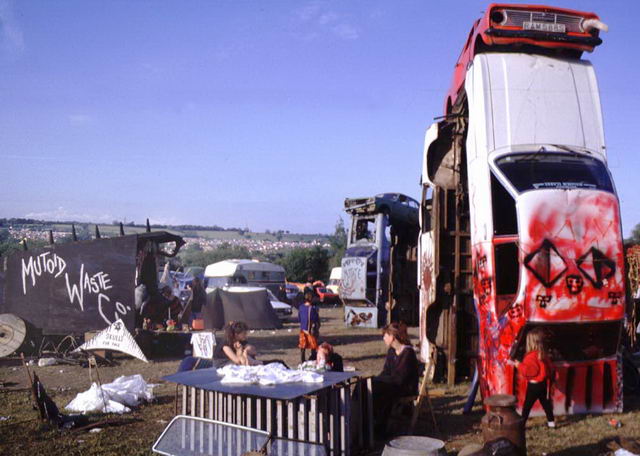 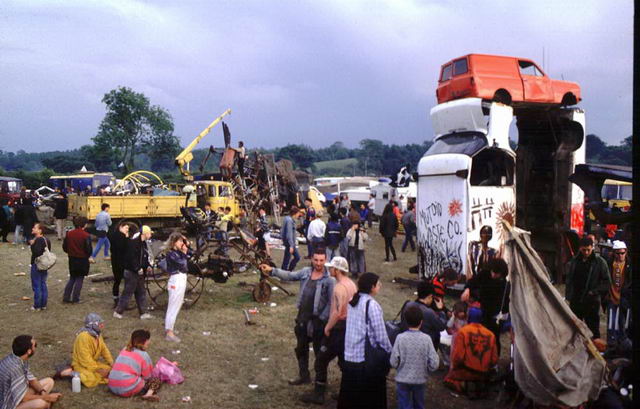 The sculptures at these parties were generally made from old bus, car & bike parts, the most famous being ‘The Skull Bus’, A giant vehicle made from an old bus , which was completely stripped down and reconstructed into something that looked like a sharks skeleton with a mutant human skull for a head.

The most remembered sculpture was a giant skeleton puppet (15-20 feet high) made from chrome exhaust pipes and stuff. It had wires tied to the arms, legs & head which went down to the puppeteirs’ who would then dance to the music. 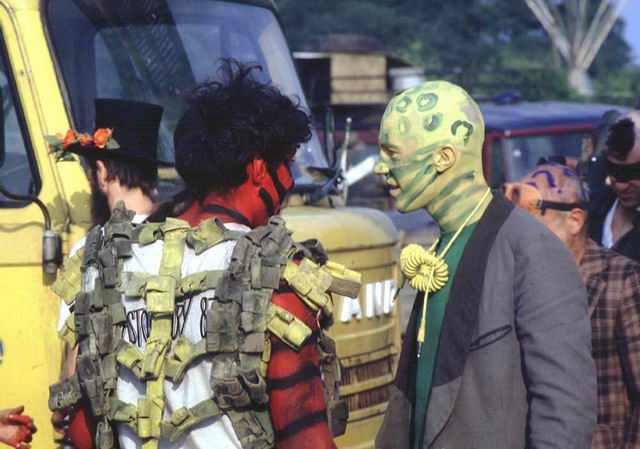 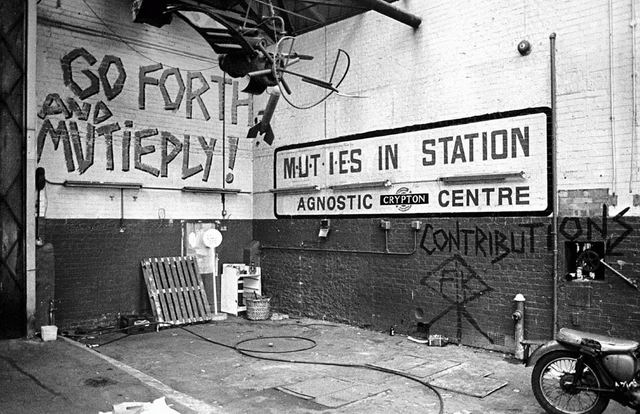 Watching this monster doing giant raving gestures in time with the music, etched in folks minds forever. Although the Mutoids are urban creatures. Quite suited to the city squat. In 1986, they made a ‘splash’ in the countryside, at the Glastonbury Festival. Personally, i’ve always prefered a blue sky above me, rather than an industrial roof. They fitted in just nicely!

Legendary large mad parties in a disused bus garage in London in the late 80’s, with the trippiest mutant sculptures this side of a nuclear holocaust creating a surreal 2000 AD style landscape of weirdness. All kinds of scrap metal and discarded waste items were used and the results were reminiscent of something in between Mad Max, Judge Dread and Strontium Dog. 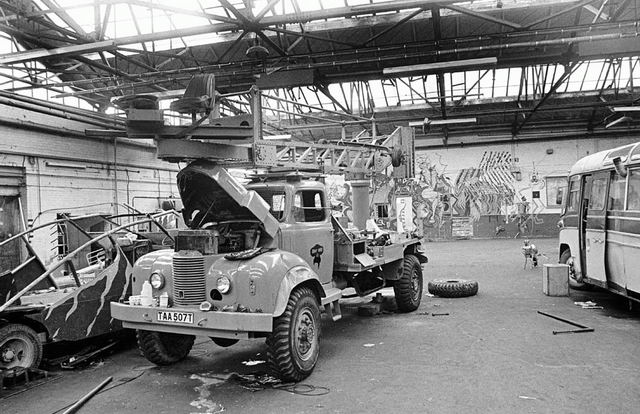 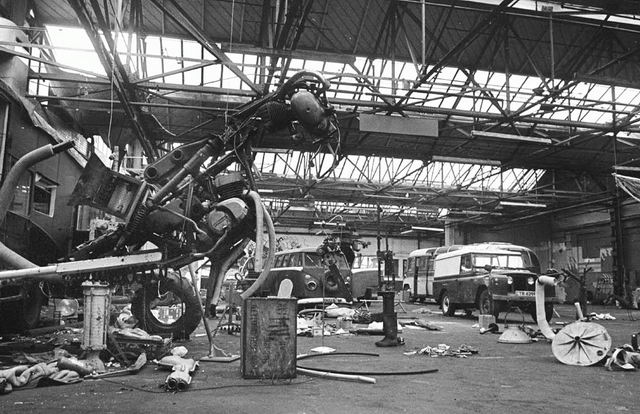 These pioneers of art, performance and partying are still at it, based in Rimini (Italy) they continue to put on parties, transform environments, make sculptures and generally mutate anything they can get their hands on.

· What is the idea behind Mutoid Waste?

When we do a party we want people to be aware of walking into another reality. Our shows have been described as walking into someone else’s dream or nightmare, whichever way you want to look at it. We definitely try to give people something to remember and think about. Open the mind, turn people on, give alternative ways/paths – that’s our buzz and always will be.

· What kind of performance work do you do?

The show we’ve been doing was developed in a slaughterhouse. It’s called “Eurokarcass” it involves the Pope, and has made witnesses vomit in the past.

· What futuristic characters are there in your shows?

Well, there’s the “Cromo Nun”, the “Pope on a Rope”, the” Virtual Reaper”, “Marcus M’Karcuss”. The fun loving public face of that famous fast food franchise “Eurokarcass” not forgetting Miss Eurokarcass”. Let’s hear it for all these sorry victims of corporate Gluttony and let’s not forget “The Zombie Drummers”, “The Transformers”, “The Breathing Man”, “The Iron Lung”, “The Fire Dragon”, “The Auto Grill (car on a spit) etc.etc.

· How has your sculpture work developed?

Well! Over the years it’s gone bigger, smaller, more colourful, blacker, uglier, more beautiful. At the moment pretty burnt out, you know “Scorched Earth” Policy and all that. At least it’s getting away from UV! I believe you’ve had a sculpture accepted by the Royal Academy. That sculpture accepted by the British Academy, all credit goes to Sam Haggarty. He’s been doing stuff for years. You’ve probably seen his massive fiberglass heads and hands at parties and festivals all over. 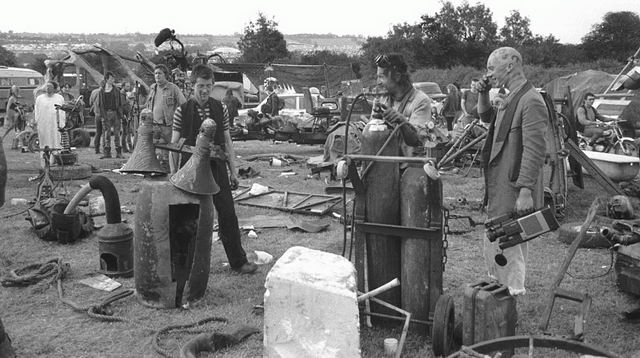 · Have you done anything along the lines of “Car Henge” recently?

Since “Car Henge” we’ve got “Truck Henge” here. We had “Tank Henge” in Berlin using 3 Russian Panzas and there are plans for “Plane Henge” to appear at “Earth Dream 2000” Australia. The Berlin “Tank Henge” was surrounded by 4 tanks standing on end and 2 Russian Mig 21 Jets.

· Are you doing any work with SRL or any of your own work on robotics?

We had talks with them in Berlin, but we’ve not worked together yet, and yes we have our own Robotic creatures. We nearly sold SLR one of our Mig 21 Russian Fighter Jets but did not quite manage it.

· How come you moved to Italy? and how is it different to England?

England has been there, seen it, done it, doing it. There were already a lot of people turned on and doing their thing. Italy was quite open for something else, which happened to be us. Lots of people had not even imagined or thought about anything like us existing. It was a totally new concept to go in to a warehouse and transform it into another planet! Not anymore. Also we wear less clothes and people speak Italian. 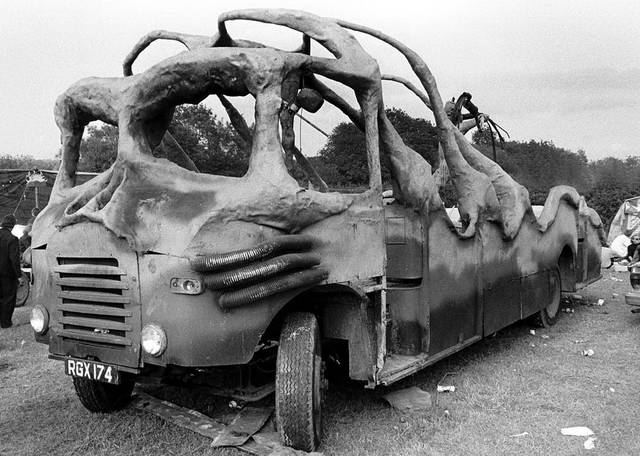 · How do you feel about people who’ve imitated what you do?

Well it is what we preach “hear the word”. About fucking time – Mutate and survive – where’s our percentage?! 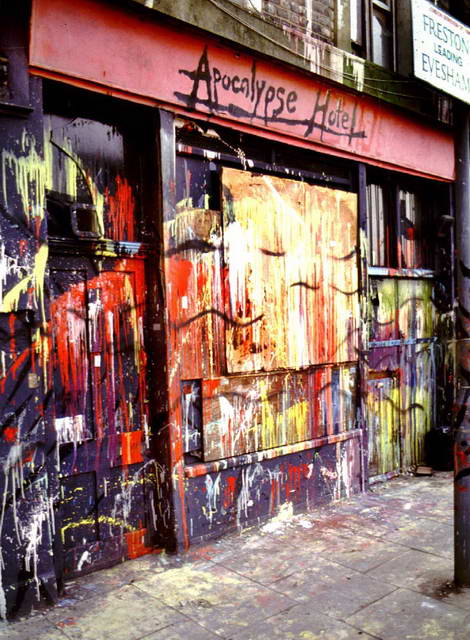 · What kind of music do you play at your parties these days?

We make an environment and play music for the mood. We have our own DJs with a wide selection of sounds and also call in DJs from the spirals and Bedlam.